Skip to main content
View other articles in "On Secrets" issue of magazine.
July 2020, August 2020

In 1969 in Seattle, getting help from the American Friends Service Committee on my application for conscientious objector status, I went upstairs to see what the Quakers were about. That Sunday meeting was my first experience of mindful meditation. “We sit in silence and listen for thoughts from God,” they told me. I liked the silence, and I liked that there was no dogma, but I didn’t believe in God. Even so, what people said in Quaker meeting made more sense than anything I was hearing anywhere else. I remember sitting in meeting the first few times, checking each thought that entered my mind: Is this one from God? It was pretty clear that hardly any were candidates for consideration.

It wasn’t until I was in the hills of Nepal, teaching school for the Peace Corps, that I discovered that if I watched my thoughts enough, they stopped; and when they stopped, all my experiences in that moment became intensely vivid. That’s mindfulness, which is taught everywhere today: sports teams, companies, universities . . .

For the last fifty years, I have been learning to be mindful. Taoism is the tradition that has been most helpful to me, but Zen and the Sufis and Kierkegaard and my Hindu friends have all taught me lots of different ways of meditating. Even so, when I meditate for myself, I sit in silent listening just as I first learned from Friends.

After the Peace Corps, I moved to Whidbey Island, where a small group of Friends became a Quaker worship group in the 1990s. Then, with an influx of weighty Friends, we became a meeting. With the new people came new practices: worship-sharing, care committees, spiritual nurture groups. Until then, I was content to be an attender. But the spiritual nurture groups and worship-sharing created deep friendships, and I realized that I was part of a whole, and I applied for membership.

In the 1980s and 1990s, I had a career as a mental health professional. I was a County Designated Mental Health Professional, responsible for determining whether a person with mental illness should be sent involuntarily to a mental hospital for treatment. In the 1990s, I was surprised and delighted when Mindfulness Meditation became a foundation of clinical psychology. My professional growth and my spiritual growth began to come together.

Dialectical Behavioral Therapy (DBT), developed by Marsha Linehan at the University of Washington, became a core framework at the Saratoga Mental Health Center on Whidbey Island, where I worked. We began teaching mindfulness exercises to clients, drawing from Linehan’s DBT Training Manual, to help them develop mindfulness skills to stop years of suicidal behavior. 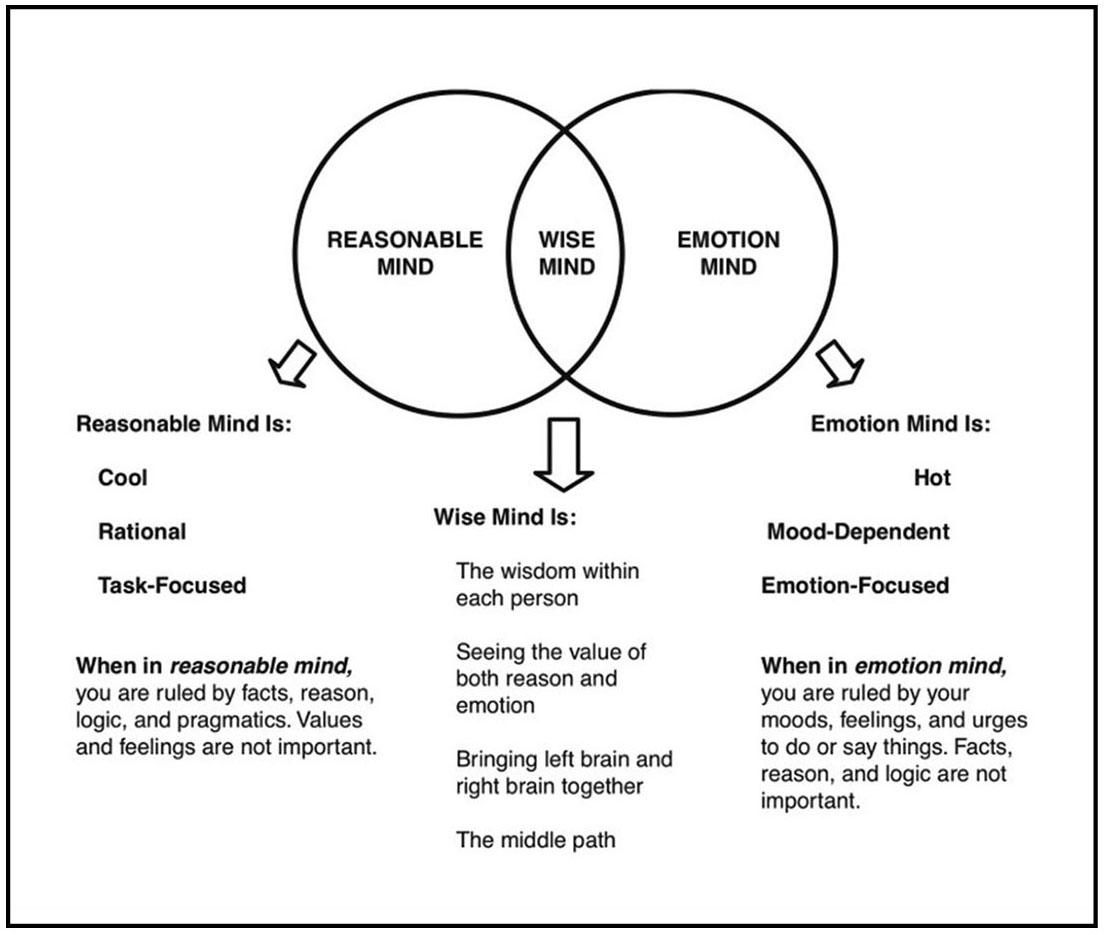 Linehan’s “wise mind” diagram depicts the interactions among different aspects of thinking that occur when a person is discerning the right action to take in a given situation. I find this diagram helps me understand and experience better how my mind is working when I’m discerning. Linehan learned mindfulness by studying at a Zen Center in Japan and became a credentialed teacher of Zen, a Roshi. She is also a practicing Catholic, and so, she draws upon Catholic mindfulness meditation practices as well. (Learn more on my webpage, www.icelu.org.)

Even though Dr. Linehan based her approach on religious practices, she is able to teach those practices at a public university because she follows rigorous scientific protocols. The methods of DBT therapy are continually being tested in controlled studies, in the same ways that new drugs are studied in comparison with other drugs and placebos. DBT’s high success rate in helping people stop suicidal behaviors, stop addictions, and recover from PTSD, depression, and other disabling mental health problems is well documented.

Similarly, Jon Kabot-Zinn at the University of Massachusetts Medical School has developed a Zen-based mindfulness therapy: Mindfulness-Based Stress Reduction (MBSR), which has been scientifically proven to help people cope with stress, anxiety, pain, and illness better than drugs in many situations. The positive results of DBT and MBSR have been replicated at many universities.

So now my spiritual, professional, and scientific lives are coming together.

Practically everyone I talk to about meditation, which is practically everyone I talk to, is shocked to hear that a contemporary Christian community that meditates exists. I am sure that many people who meditate would fit into Quaker meeting well. For meditators, sitting in silence for an hour is not the ordeal that it is for most people. They’re already aware of how their thoughts come and go. Many would welcome learning how to choose the ones that come from God and act on them. And they, like all of us, would thrive in bonds of friendship that grow with authenticity and listening.  ~~~