Skip to main content
View other articles in "On Heritage" issue of magazine.
July 2016, August 2016

Knowing Oneself as Spirit

A couple of years ago, I traveled to York, England, for a conference. I realized that the Quaker heritage sites that I had always wanted to see were not too far from there. Planning which locations I could get to easily without a car, I came up with two: Swarthmoor Hall, where Judge and Margaret Fell allowed Quakers to meet back at the beginning of the movement, and Kendal Meeting House, which is the site of the Quaker Tapestry Exhibit.

Swarthmore Hall is now part of a functioning conference center. The historic building itself is furnished to replicate the interior of the mansion that Fox knew. Paintings depicting early Quakers grace the walls. And about five minutes away on foot is Ulverston Meetinghouse, which George Fox bought for the local Quaker community and where meeting for worship is still held. I arranged to be there on a Sunday so that I could attend. 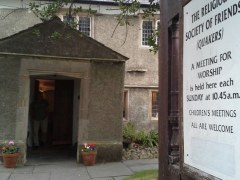 A few days later, I was at the Quaker Tapestry exhibit (quaker-tapestry.co.uk) – several rooms filled with tapestries created by meetings all over the world, each one depicting a scene from Quaker history.

These excursions were both enriching and inspiring. But I kept asking myself, “Why am I doing this?” You see, I hadn’t been to Quaker meeting for quite some time and wasn’t even sure I was still a Quaker. Then after I returned home, I read Steve Rosenbluth’s article, “An Unexpected Pilgrimage,” in the January/February 2016 issue of Western Friend, in which he describes visiting other, but equally resonant, early Quaker sites in England, and I was moved to tears. Unlike his, my pilgrimage had not been unexpected, but the richness of it was.

I had been an active member of Berkeley Meeting until I moved away from the area in 2000. Shortly after relocating, I met Adyashanti, a teacher in the Eastern tradition, and knew I had found what I’d been looking for all my life – a teacher who is truly enlightened and, more important, made it clear that I didn’t have to mold myself to alien ideas and practices in order to find what I was seeking. As I moved deeper and deeper into consciousness of all that is, I found myself bored at Quaker meeting. I couldn’t find that connection there, and it didn’t take long before I stopped going entirely. I didn’t drop my membership in the Society of Friends, however. I am on an internal pilgrimage, and I decided I won’t know if I am still a Quaker until I finish with this journey.

Although I haven’t categorically decided that I am not a Friend, I do find myself with some truths I have experienced first-hand that I don’t seem to be able to share with most Friends. The main and most important one is that “I” don’t really exist; rather Spirit lives as this form called “Sonda.” I am sure that early Quakers knew this because it is evident in how they spoke. The mystic Isaac Penington, and George Fox, and in more modern times, Thomas Kelly. But when I go to meeting, the assumption of everyone in the room, so far as I can discern, is that we each live from a separate self called a “me.” This may be how it feels, but it is not the deepest truth. And if I doubt whether it is possible for Truth to flow from an erroneous assumption.

So I still wonder, “Am I really a Quaker”? And I also wonder, “What is a Quaker, really?” I would hope for a practice that goes beyond a quaint set of beliefs and an admirable set of non-hierarchical organizational practices – one that allows us not just to experience Spirit but to know ourselves as Spirit.

Perhaps this is why I was so moved when I visited the Quaker sites, and also why I cried when I read Rosenbluth’s account of his pilgrimage. Back in the seventeenth century, Friends didn’t talk from the head, but from the heart, where they were truly one in God, and therefore in each other. That is what I crave in my spiritual connections with others: Oneness, not as an idea – despite the lack of doctrine, Quakers are full of ideas – but as a living reality. ~~~

Sonda Beal is a member of Berkeley Meeting (PYM). She lives in Santa Cruz, CA, and blogs at miracleofawakening.blogspot.com.