In the fall of 2015, my long-time friend Helen was about to move away from her family farm in Northern Ireland, where she had lived near her brothers for the previous seven years. My husband Tom and I decided to join her there and to visit some of the Quaker heritage sites that she had often described remembering from her childhood.

We first visted Moyallon Meeting House, a grand old building near Gilford, County Armagh. Completed in 1736, it was officially designated as a building of “special Architectural and Historic Interest” in 1976. Maintaining this property is a challenge, especially since the meeting community is relatively small – about thirty active members. They responded to the challenge creatively by building a modern addition in 2006, which now serves as a conference center for a variety of groups as well as the site for two weeklong summer camps for Quaker youth from all over Ireland. Rentals from the conference center provide the meeting with income, which they use for maintenance expenses and to pay an on-site caretaker. I thought about the advantages that a permanent site must offer to the summer camps, knowing something about the challenges that our own Mountain Friends Camp has faced as it moves from site to site.

As is customary, Moyallon Meeting House has an adjacent graveyard. I looked for names familiar to me from Intermountain Yearly Meeting. I found an Elizabeth Frances Hoge, and on a list of original Quaker families, I saw the name Hobson. The gravestones were, for the most part, all quite simple. However, our host pointed out that the Richardson family – wealthy patrons and owners of the Bessbrook Linen Mill – had a separate burial area with somewhat larger gravestones.

The nearby village of Bessbrook had long impressed Helen as an example of Quaker values. John Grubb Richardson founded the village in 1845 to provide homes for the workers in his family’s linen mill  – calling it a model village. The village eventually housed around 2000 workers and was run according to a philosophy developed by Richardson of “three Ps” – no public houses (pubs), no pawnshops, and no police. The original houses were so well constructed that they are still inhabited today. The living spaces were humble and small by today’s standards, but much better than the homes of most workers in those times.

We asked our host, retired veterinarian Ross Chapman, about “the Troubles” in Bessbrook, and the bitter history of differences between Protestants and Catholics. Chapman said that the original Bessbrook linen mill had an unusual history of employing members of both faiths. “However,” he said, “the management was all Protestant, and the Catholics had more subordinate positions.” Quakers fit into the Protestant category. During the Troubles, from the mid 1970s through the 1990s, Bessbrook was the center of some of the worst violence in Northern Ireland, and the British Army converted the old linen mill into a garrison, occupying it until 2007. We asked what Quakers might do to help heal the deep divisions that still exist in Northern Ireland. In his gentle way, Chapman reminded us that the situation is complex in ways Americans can’t comprehend. He said that one thing he and other Quakers do is maintain a lifelong effort to have Catholic friends and to build trusting relationships with them.

It seemed that both the historic Quaker sites we visited in Ireland had this in common – Friends creating worship and community spaces for others to feel welcome and at home. On Sunday, we attended meeting for worship in the Bessbrook meetinghouse. Several Friends gave vocal ministry. Near the end of the meeting, one Friend rose to speak about the Irish potato famine of the 1840’s, and how it had driven hundreds of thousands of Irish out of the country and into other lands as desperate refugees. Then the Friend spoke of refugees today, fleeing similarly desperate situations, coming into Europe. His closing words, “We must open our arms to them.”  ~~~ 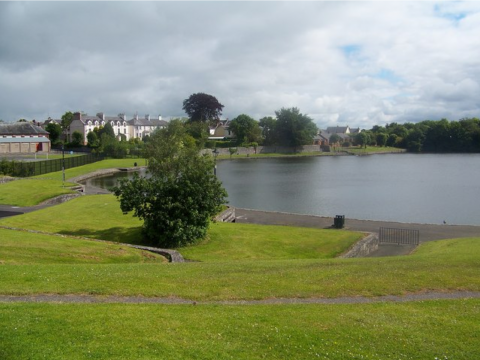 Sara Keeney is a member of Albuquerque Monthly Meeting and serves as presiding clerk of Intermountain Yearly Meeting.