Skip to main content
View other articles in "On Neighbors" issue of magazine.
September 2019, October 2019

I want to start with an inglorious story of protests gone by. During the lead-up to the Iraq war in 2002-2003, I was a student at Earlham College. Weekend after weekend, I traveled from Indiana to Washington, DC, for marches and protests. It seemed to be a ritual intended for building up and projecting our own sense of power as a people. I don’t remember how many weekends I made that trip. We marched through the empty corridors of large granite buildings with nobody in them, seemingly hundreds of thousands of people, yelling to the ether. 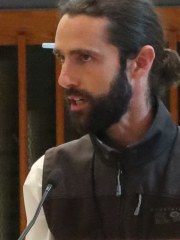 Eventually, the exhilaration began to wear off. Those streets, through which our chants reverberated, reverberated with hollowness. I found myself leaving those marches more demoralized than when I arrived at them, depressed by the disconnect between our rhetoric – “This is what democracy looks like!” – and the reality that the rich and the powerful would carry on as usual. Not only did we lacke the number of people necessary and capable of making the sort of push-back against the regime that was needed, we were also lacking that power within – that sense of integrated authority that arises from something beyond ourselves. The power of the spirit. The power of God.

I felt a similar lack of power after some years of non-stop organizing around climate change in Massachusetts. I burned out. I could see that we lacked the political power, the financial power, and the economic power to achieve what we wanted. But even more troubling, we lacked the inward spiritual power that Jim Corbett describes at work in his awesome book Goatwalking, “Cultural breakthrough need not involve masses of people, but must be done decisively by someone.” (1991)

I want to name our condition, Friends – that we are lacking power. We have all sorts of indicators about the sad state we are in. I need not recite the statistics about global climate collapse, rampant inequality, racism, and white supremacy. We know the magnitudes of these problems, but we do not know how to engage the sort of power, nor use the tools that are at our disposal, to help us rise to the occasion. And so, in our committee structures and our committee work, in our marches and protests and chants, we fall back on the way things have been in the past. We try to replicate those things we have seen to be powerful in the past; but if we don’t attend to the life and power in those things, rather than the structures and the forms that they take, they will lack transformative power. Early Friends talked about this as forms without life.

I want to bring us some good news. There is a power that has gone by many names. It has shown up in our history, over and over again. It has shown up as the God of Moses, who proved the Empire and the Pharaoh to be charlatans. It is the power of Jesus, who flipped the tables and made the Roman legions irrelevant. It is the power of George Fox and Margaret Fell, who saw that there was an opportunity for the system of control and domination they had been living under to be turned upside down – an opportunity to find another basis for their lives together and our lives together, on the planet and with each other.

I have faith in a still, small Voice that whispers in the silence. I believe that Voice is not just something nice to listen to. It’s not just to soothe me in my challenged times; but it’s something that, if I put my faith in it fully, ought to rise above me. What if I treat that Voice as if it is God?

This is not the God of popular imagination that reigns with edicts and demands. This is a God of freedom, who does what she wants and goes where she will and brings power in unexpected places. It is a God that, as James Naylor said, “takes its kingdom by entreaty,” by invitation. Invitation is the opposite of domination. Asking and testifying and inviting are the reverse of control and oppression. The sound of that call, that whisper, cannot be domesticated, and it is the scariest thing that the powers-that-be can imagine; because when we turn ourselves over to it, we are no longer bound by the things that this culture expects us to be bound by.

So I want to describe a way of looking at the power and the tools at Friends’ disposal that can help us rise to the challenges we face today. I want to invite you to contemplate the possibility that there is a Quaker Core, which has pieces that are analogous to the steps in a Twelve-Step program – a series of steps that make it clear that we are following a path, which leads somewhere, a path that will probably transform your life and bring you great gifts. So I am going to work with fours pieces today, which I can use to describe the Quaker Core.

First, there is a spirit that goes by many names. You may know this spirit as the Light, the Voice, the Seed, or Truth, it is available in all times and all places. It provides us with the guidance we need to do what needs to be done.

Second, if we give ourselves over to that Voice, we can enter into new relationships with ourselves, with one another, with the earth, and with God. Friends and others throughout history have testified that this feels like being saved – saved from the cycles and the traps of being stuck in this world that continues to grind out oppression and usury.

Fourth, we need a community for liberation. It is hard work to free ourselves from the things that hold us back from following the Voice that calls us. Friends in the past have helped free each other – not only in spiritual terms, but also in physical, concrete terms – to follow their callings.

I am convinced that this is not a burden that we have been shackled with, but a gift in this time, this challenge to see if there is still some use that the Religious Society of Friends will play in this world, as it has in centuries past. I am grateful to be on that journey with all of you.  ~~~

The text above was excerpted from a complete transcript of Jay O’Hara’s presentation, which is posted at: westernfriend.org/media/hope-abyss-faith-kinship

Jay O’Hara is a member of Sandwich Monthly Meeting on Cape Cod, and he travels in the ministry under the care of West Falmouth Preparative Meeting. In May 2013, Jay and his friend Ken Ward gained national attention for piloting a small boat into the path of a cargo ship full of coal. Jay is a co-founder of the Climate Disobedience Center, a national organization that helps communities resist climate chaos.