Skip to main content
View other articles in "On Separation" issue of magazine.
November 2019, December 2019

For a single moment, time collapsed in the Tucson International Airport. Heads turned abruptly. Passersby stopped dead in their hurried tracks. A soul-deep wail erupted from the throat of a sturdy woman with a mighty set of lungs. Haregewoin’s cry shattered the hubbub and echoed off the sterile walls, like thunder. All throughout the terminal, from baggage claim to the Homeland Security screening lines, a haunting stillness presided. Haregewoin’s two children and her husband had just arrived by plane from Africa, just stepped into view, and stood there atop the arrival ramp escalator, fifty yards away from her. Haregewoin had not laid eyes on her family in years, had not been sure that she ever would. Her wail was a wail of anguish and ecstasy, like the prophets of old.

Haregewoin had barely escaped an unknowable end. She had been tortured as a political prisoner in her African homeland, was hospitalized, then managed to escape from the hospital. For the next two years, her exodus through South America and Mexico included another hospitalization and a stint in jail, but she finally managed to reach the United States – where she was promptly arrested at her port of entry while petitioning for asylum.

U.S. rules of immigration, asylum, and refugee status seem so arbitrary and rapidly changing to me that I get lost in the details. At one time, it seemed most applicants for asylum were granted release. Then it became uncertain. Now it is rare.

I asked a Friend, a lawyer, whether a basic explanation of this system exists. He said that although a set of rules does exist, many of them are confidential and can only be accessed publicly through Freedom of Information requests, which typically take years. Much of this information is in the hands of the U.S. Border Patrol, which is an especially secretive and sometimes dishonest agency. And even where the laws are clear, they leave agencies like I.C.E. and the immigration courts a lot of discretion about how to handle questions of bonds and deportations. Much of this law, my Friend confirmed, also changes on a regular basis.

We, the members of Casa Mariposa Community, came to know of Haregewoin through a University of Arizona Law School student. After her initial arrest and nine months in a detention center, Haregewoin was deemed eligible for release by “bajo palabra” (personal recognizance) with one condition: She needed a place to live while pursuing her asylum claim. We said yes.

Haregewoin came to live at Casa Mariposa for nearly a year, giving us a searing lens into the impact of family separation, or rather, family severance. During her months with us, Haregewoin was able to go about her ways freely, and she got a job in a local restaurant. Of course, all that time, she worried that her family wasn’t with her.

The Casa Mariposa Community grew out of a discernment process in 2009 among Pima Monthly Meeting’s Young Adult Friends and wider circle of spiritual activists. Hospitality was one of the charisms of the founding members’ vision. Midweek Meeting for Worship, followed by a public meal, centered every week. Early on, our most frequent dinner guests were women who had been released from immigration detention and dropped off at the local Greyhound bus station to fend for themselves. Word of our work spread, and this is how Haregewoin eventually came to be with us.

In 2012, changes in Casa’s membership and scant finances put our community on the verge of closure. I announced at the rise of meeting one First Day that we were looking for a new place to hold midweek worship, as the future of our community was becoming tenuous.

Immediately after that meeting, Friend Meredith Little brusquely pulled me aside. She had been a contemporary of Jim Corbett during the Sanctuary Movement of the 1980s. Meredith was terse, and she said in her lawyer-like way, “I haven’t seeing anything like Casa Mariposa since Sanctuary days. I like what the community does. And I want it to continue. You find a house that meets your needs, and I’ll buy it. This is not charity. It’s an investment.” Period.

We found a house, and our hospitality not only continued, it flourished. A few Casa members formed a group to organize visitation at immigration detention centers, and the group grew. We came to know and welcome many women, men, and children into our new home. Each evening, our dining-room table buzzed with conversation – stories of separation, struggle, and hope. While I have never been a parent and cannot really know what it would be like to be apart from children, living at Casa Mariposa was a crash course in the impact of family severance.

In the mean time, bajo palabra had become a thing of the past. Today, if people are granted release at all, it usually comes with a high bond – tens of thousands of dollars. I have come to understand that the financial side of immigration detention policy is the hidden wall that divides families. It is not as graphic as a thirty-foot-tall steel barrier, but is every bit as effective at keeping families apart.

While Casa Mariposa was welcoming migrants who had been bonded out of detention or dropped off at the Greyhound station, Pima Monthly Meeting was discerning how it could respond as a body to family separation. Initially, the meeting connected with another local congregation to help provide sanctuary. Eventually, we formed a Migration Action Committee, which emerged from a vigorous threshing session. We also created a bond fund for migrant detainees.

Bonds are bridges over the concertina wire of immigration detention centers. They allow people like Haregewoin to have the liberty to seek employment and justice and reunification with their families. I now understand what Meredith Little meant when she said, in her timeless wisdom, “This is not charity. It’s an investment.” She was not talking about finances, but about pure Light at work – our testimonies with feet. 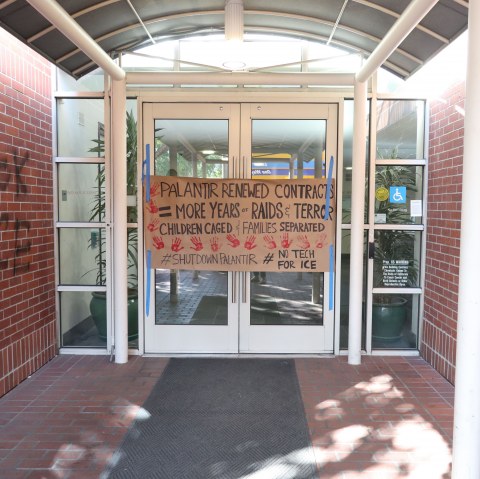 Haregewoin’s wail at once proclaimed and envisioned a new day. Not only for her family, but for all people. A day when “every tear will be wiped from their eyes, and there shall be no more death and mourning, wailing or pain, for the old order has passed away.” (Revelation 21:4) ~~~