Skip to main content
View other articles in "On Control" issue of magazine.
July 2019, August 2019

That of God in Research

In the September/October 2018 issue of Western Friend, “On Children,” I wrote about my experiences as a Child Protective Services (CPS) social worker. Much of what I described about investigating child abuse concerned “control.” For example, my Quaker practices of listening in silence and discernment helped me “learn the rules so you can break them properly,“ as the Dalai Lama recommends. “The rules” in this case were Washington State’s Child Protection Laws and the policies of CPS, which attempt to control the behavior of parents by enforcing norms to restrict physical discipline of children and to achieve minimum levels of care. Those enforcement structures are the stick. The carrots used to control families are the programs that CPS offers to help them, as well as the refuge in foster homes that CPS offers to children when parents fail. Unfortunately, social workers can cause harm when they fail to use judgment and discernment in applying the laws appropriately in each unique situation. As Parker Palmer so beautifully describes, one of the paradoxes of life is that both control and spontaneous creativity are necessary for human flourishing.

During the two years when I did CPS social work, I was not part of a Quaker meeting. Had I been part of my current meeting, I undoubtedly would have done my work better.

I was a CPS social worker for a little over two years, which is about the average tenure. I left the job for the usual reasons: My caseload was too large. There wasn’t enough time to do good, or even adequate, social work.

As soon as I quit CPS, I was recruited to work for the Office of Children’s Administration Research (OCAR). This was an innovative research program, created by Dr. Diana English, who was passionate about understanding the causes and cures of child abuse and neglect. She was a wizard at writing grants to fund the research. I did data management and statistical analysis for her. Since I knew both social work and computers, I was able to help design research projects. I did that work for twenty years. The new knowledge that we created resulted in the Washington State Legislature hiring more social workers and funding more effective family-support programs.

Research drew on my Quaker faith and practice differently than front-line social work had. Research is solitary and creative. It provides few opportunities to seek that of God in other individuals. Every research project presents problems that no one has ever before considered. I spent much time listening in silence, letting my mental chatter quiet, then imagining various ways of solving research-design and computer-programming problems. Reason and logic were necessary, but not sufficient. Imagination, intuition, and my Quaker experience with openings and leadings worked well. I was surprised over and over again by how well they worked. An approach to solving a problem would come to me from the silence; it might seem far-fetched, but then, against reason, it also seemed promising. I would begin pursuing it, and often I would discover a string of unexpected coincidences that made it successful. My Quaker faith, which perseveres in the face of seemingly impossible situations, was critical. I am not gifted at coding, but in the middle of the night, usually between midnight and 4:00 AM, I wrote programs that I could barely understand later, programs that worked. Here I confronted the paradox of control – that both order and spontaneous creativity are necessary.

One of my most memorable research projects was the “Longitudinal Studies of Child Abuse and Neglect,” which followed 250 children and their families for eighteen years. These were children who had been reported as maltreated before the age of four. I wrote different programs for tracking and interviewing these families. Thinking through how to enter, store, and retrieve all the information we needed, in a user-friendly way, was a challenge, and my Quaker patience was tested. But ten years later, I was gratified to realize that people were still using my programs. Because our computer system was so user-friendly (You know “user-friendly,”  . . . you do something on the computer, and it works!), our rate of retention of families in our study was outstanding. Keeping track of troubled families for eighteen years is a big challenge. The knowledge and understanding we gained through this research project, about the ways these children were affected by the problems in their families, led to critical changes in policy and practices in child welfare social work in the state of Washington. 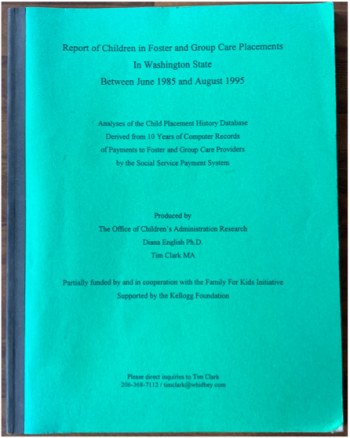 Another memorable research project produced the “Report of Children in Foster and Group Care Placements in Washington State between 1985 and 1995.” In this research, I developed methods to understand patterns of children going in and out of foster homes, methods that involved analyzing data that had been saved on the mainframe computers that began writing payment checks to foster parents in 1985.

The police put children in foster care for many reasons. For instance, a young child could be left alone by a parent who has gone out partying, another by a parent who has been arrested. At the time when I started this study, the standard practice in the state of Washington was for the authorities to take the child home when the parent returned home. This might happen repeatedly for any child – alternating between foster care and living with their parents. Washington’s legal system gave high priority to parental rights, and those rights were rarely terminated.

A major research problem we faced, trying to analyze the situations of thousands of children by looking at data drawn from a check-writing mainframe computer, was that the data we had to work with was extremely inconsistent. Often, a child’s name was spelled differently in different instances, or the birthdate was entered incorrectly. This became one of those times when a series of remarkable coincidences conspired to make possible what was unachievable by logic alone. I was following leadings. The Internet had just begun. I was able to pose my problem to a mailing list of academic and government researchers who were using new programming techniques called “data mining.” I got a response from a Professor of Computer Science at Columbia University who had a PhD candidate who had written a computer program that could analyze unreliable data and create a unique, reliable “identifier” for each child. Just what I needed.

By adding the new identifiers into the data, I was able to determine how many foster homes each child had been placed in, and for how long, and at what ages. With that, I discovered that many children bounced back and forth frequently between home and foster care, and among various foster homes. That new knowledge left everyone aghast. Hundreds of children each went in and out of foster homes dozens of times a year – hundreds of times in each childhood – from their first placements as infants or toddlers until they left the foster care system at age eighteen.

After that discovery, CPS shifted its approach – away from virtually unquestioned priority on parental rights and towards a primary goal of making sure infants are adopted. Hundreds of specialized case workers were hired to help with the legal processes of terminating parental rights and finding families who wanted to adopt young children.

Even though my decades in research did not bring me the same kinds of satisfactions as my years in front-line social work had – such as helping to keep families together or finding good homes for children – conducting research that created new knowledge that changed state systems was immensely gratifying, as was seeing more caseworkers hired as a result of my work.

Making the lives of children and families better, even though I didn’t know them, was also gratifying. I occasionally encountered children who had been affected by our research. For instance, I met children who had been adopted as infants, rather than being bounced back-and-forth for eighteen years between foster homes and parents who could not care for them.

The experience of research seems to me quite similar to Quaker practice. Sitting in silence, thinking about the way the world is, and making sense of it scientifically are for me essentially the same experiences as the ones I have in Quaker worship – waiting in silence and examining my thoughts, to see which ones come from God.  ~~~

Timothy Clark is a member of Whidbey Island Friends Meeting (NPYM). To read more about the research described in this article, see: www.ndacan.cornell.edu/datasets/dataset-details.cfm?ID=158 and  youthlaw.org/case/braam-v-state-washington/