A Girl with Vision and Resolve

When Veronica Obodo-Eckblad is asked about her escape from war-torn Nigeria as a seven-year-old, she is cryptic. That’s because her emphasis – actually, her life’s focus – isn’t on herself. What drives her is her commitment to others and to a dream. That dream morphed into conviction and then into reality. But we are getting ahead of ourselves in this gripping story, so let’s settle down.

Veronica was born in the Imo State of Nigeria, and soon after her birth, the Biafran War began (1966-1970). She remembers standing in lines to get oatmeal from the humanitarian organization Caritas, because normal commerce was so disrupted. People were hungry, frightened, and each was mourning the death of many.

The catalyst for Veronica’s dream occurred when she was only six years old. She sat beside her aunt, who was trying to nurse Veronica’s infant cousin. She could tell that her aunt was anxious, but everyone was anxious. Then, as Veronica watched, the tiny boy slowly stretched out in his mother’s arms – and died. “Right there I knew what I must do,” recalls Veronica. “I knew I needed to become a dibia.” That is, she knew she needed to become a doctor. 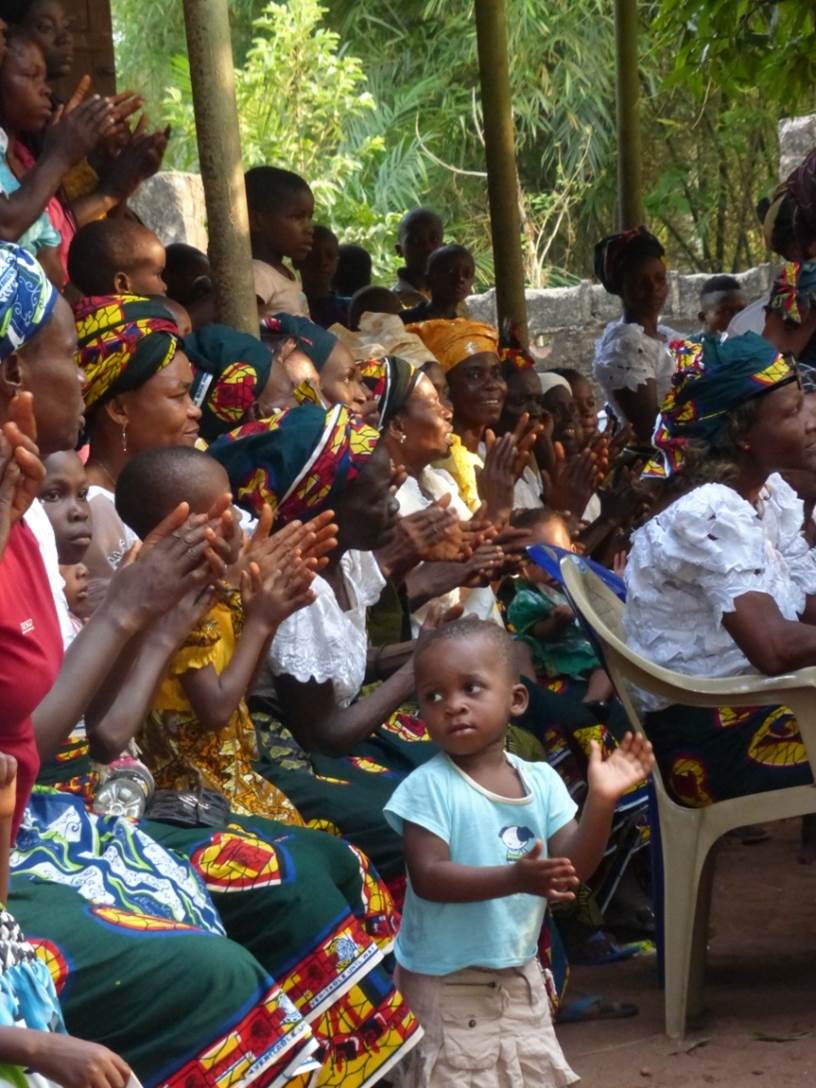 Veronica was surrounded by children with kwashiorkor, a malady which results from too little protein. Even though Nigeria is one of the most educated countries on the African continent, teachers, nurses, and doctors cannot resolve nutritional problems when all normal activity is disrupted by war. Veronica and her family needed to leave the country, which wasn’t going to be a simple matter of climbing on a plane in Lagos. The Nigerian government was blocking people from emigrating. Veronica remembers the night when she and her twelve-year-old brother, Ike, were guided through the jungle in the dark. “At first, they had laborers carrying us,” she says. “But soon we had to walk.”

Walking through West African jungle territory is hard to imagine unless you’ve done it. The vines and insects are seldom represented in films; it is no child’s play, but Veronica and her brother needed to struggle through it. When they reached Cameroon, they were hidden in homes during the day and continued to walk at night. When Veronica is asked who they stayed with, in which homes, how far they’d walked, she answers simply, “I was seven. I don’t know. . . The guides had some contacts, and we also looked for kind strangers.”

It took nearly a year, a blurry time, before Veronica and Ike met up with their brother Theo, and the three of them flew to JFK Airport, where they were met by their father. Blurry because, as a seven-year-old, Veronica didn’t understand politics and negotiations and had no concept of how assiduously her father, in the U.S. on a scholarship to study business administration, was working to bring his children to join him. A seven-year-old child just knows when to be quiet and hide until dark.

What wasn’t blurry at all was Veronica’s resolve. Soon after she arrived in the United States, her father asked her what she wanted to become when she grew up. With no hesitation, she answered, “A dibia!” Her father responded, “That means doctor in English.”

Veronica also knew that after she finished her studies, she would return to her village, Ibiasoegbe, to build a clinic. She knew she would create a beautiful place for people to become well. As Veronica pursued her education, including the Oakwood Friends School in Poughkeepsie, New York, she told her plans to anyone who would listen.

“In Nigeria,” she says, “there is an expectation that you will become educated and then return to help your people. That is the custom. The Quakers added to that by cementing in me the values of social justice, that we are our brothers’ keepers. I was in a Quaker boarding school throughout high school; they helped me form who I am.”

Throughout the long years of university and medical school, Veronica never lost sight of Ibiasoegbe. She thought of her infant cousin and the other children who died or suffered from kwashiorkor, whose bellies were swollen or whose bodies were wracked with malaria. Her commitment to Ibiasoegbe, her home village of 8,000 souls, never waned.

She shared her vision with the man she married, Todd Eckblad, and together they moved to the San Fernando Valley in California and began their family. Their daughter, Ariel, and son, Isaiah, knew of their mother’s plan to create a clinic in Nigeria. Veronica and her husband became members of San Fernando Friends Meeting and later attended a Quaker meeting in Minnesota. When Veronica returned to Northern California as Dr. Veronica Obodo-Eckblad, a family physician with Kaiser, her medical colleagues there all soon knew of her plans to create a new clinic in Nigeria. 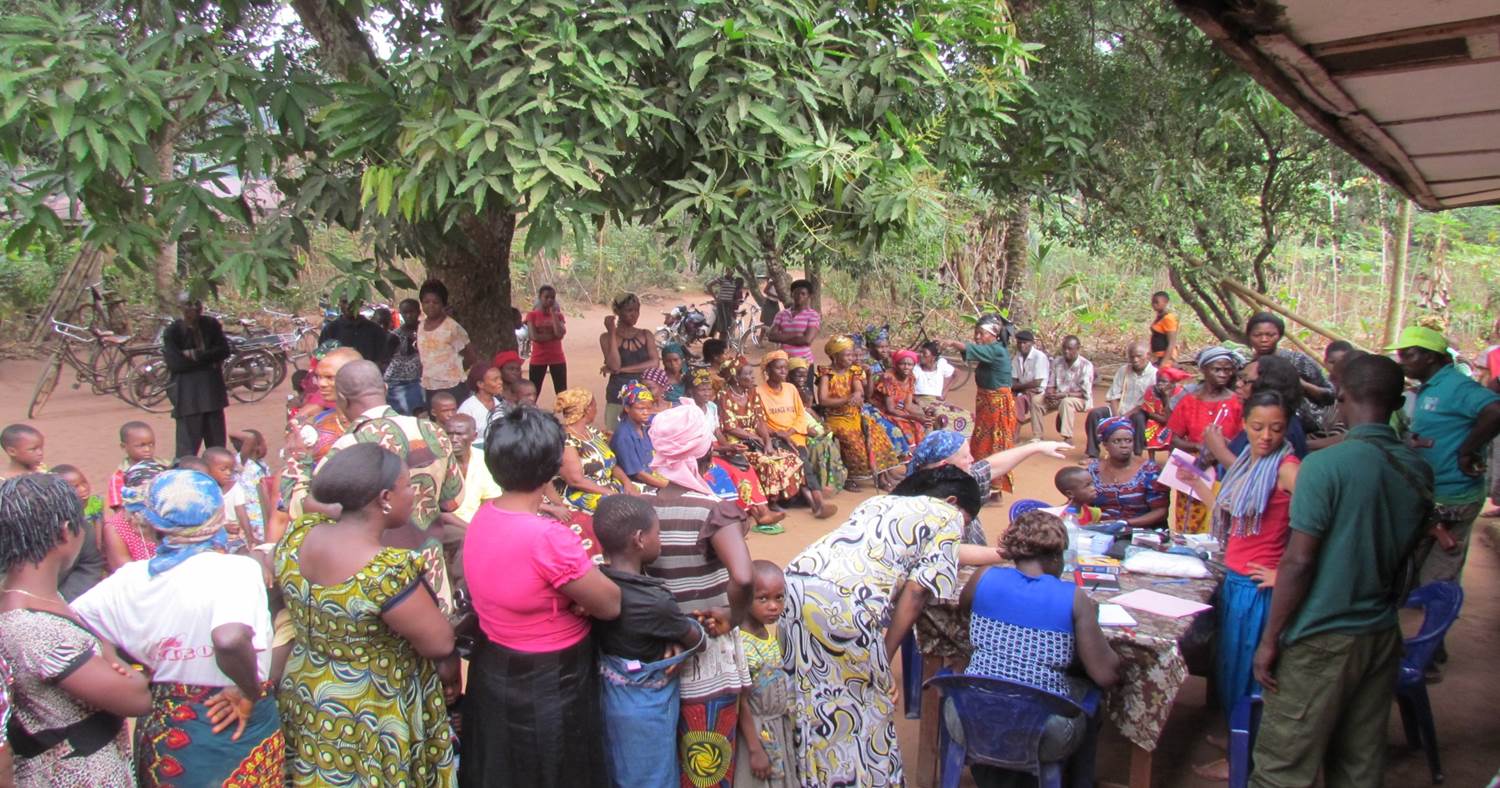 When the family moved to Fairfield, they joined the Davis Friends Meeting. The meeting soon provided a clearness committee for Veronica, when she began to see that “way was opening” for her to begin work on the Ibi People’s Clinic. In 2011, she took a group of Americans to Ibiasoegbe. The group included three Friends, Marilee Eusebio, Dr. Jim Eusebio, and Julie Harlow. Several of Veronica’s medical colleagues also traveled with the team, as well as her husband and children.

For twelve days, the team examined people, treated wounds, and distributed medications. They worked closely with the Nigerian nurses who live there, who were doing their best in a dilapidated building with few resources. Together, the visitors and the local nurses talked about plans to build a clinic that would honor the people and their medical needs. These conversations helped Veronica and her team return to California with better-refined plans for the clinic, and they left behind in Nigeria many people filled with new hope.

In 2014, Veronica took another team to Ibiasoegbe. By then the building project had begun, and many Nigerian friends and cousins helped to manage the long lines of people who sought medical attention from visiting doctors. There were well-baby checks, discussions about nutrition and how to avoid diabetes, and instructions about the dangers of self-diagnosis, which often leads to an overuse of malarial drugs. Veronica’s team also developed greater clarity about the extent of the need and how to meet it.

The first portion of the clinic cost approximately $50,000 to build. When the facility is complete, it will include examining rooms, a secure medicine storage room, a reception room, and an operating room. Another challenge has been to obtain the medical equipment, beds, and supplies that are vital to the smooth functioning of a clinic. Veronica’s team has secured much of this needed equipment from a nonprofit organization called MedShare (www.medshare.org), which collects equipment donated by hospitals and doctors’ offices and then distributes it without charge to places that need it.

The cost of shipment, however, is the recipient’s responsibility. Veronica, with the help of board members of the Ibi People’s Clinic, members of the Davis Friends Meeting, and other supporters, raised the $25,000 necessary to ship furniture, medical equipment, and supplies to her village. It will be critical that she accompany that shipment when it sails.

The work goes on. The mission statement of the Ibi People’s Clinic is: “To provide medical care, with emphasis on preventive medicine and health education, to the underserved population of Ibiasogbe Village in Imo State, Nigeria.”

Dr. Veronica Obodo-Eckblad is the grown-up version of a girl whose spirit led her through the jungles of war-torn Nigeria. Today, she continues to stride through jungles – of international red tape. Anyone who wishes to support her work may contact: Ibi People’s Clinic, c/o Veronica Obodo-Eckblad, M.D., 1912 Garden Meadow Avenue, Fairfield, California 94534. ~~~

Kary Joseph Shender is a member of Live Oak Meeting and an attender of Davis Friends Meeting. As a way of ensuring a healthy future for her grandchildren, Kary is focusing her time and energy on criminal justice reform and immigrant rights. She reminds us that, unless we are Native American, we are all immigrants.