Skip to main content
View other articles in "On Teachers" issue of magazine.
September 2020, October 2020

An FCNL Education in Civic Engagement

Future generations will likely study the events of this year and scratch their heads. Just considering a global pandemic (and the failure of our leaders to address it) and racial injustice reaching a fever pitch, one can almost envision an entire college course examining the calamities of 2020. Add to that the voter suppression, gun violence, hunger, poverty, wars, and extinctions of plants and animals that were already in play before 2020’s headline events, and it almost sounds like a fiction course.

Yet that history would be incomplete without a study of the Friends and the like-minded truth-tellers I’ve met in my two years of working at the Friends Committee on National Legislation (FCNL).

Nearly eighty years since its founding, FCNL remains firmly at the intersection of faith and politics, and holds a hard-earned reputation as one of the most effective religious lobbies on Capitol Hill.

A huge part of our work is civic education and sharing the belief that lobbying from a place of faith is about advancing government policies for a more just world. FCNL’s lobbying is grounded in our faith that there is that of God in every person and centered on developing personal relationships with staff and members of Congress. 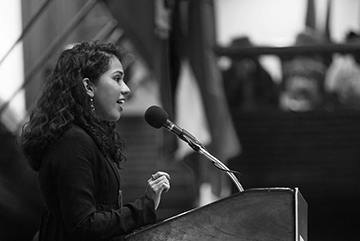 I’ve learned that educating young advocates has been a defining characteristic of FCNL’s organizational culture since the 1970s. More than fifty years ago, FCNL launched what was then a year-long internship program. This has since evolved into our Young Fellows program. It brings seven-to-ten recent college graduates annually to Washington, D.C., to work with our legislative and strategic advocacy teams. Today, FCNL engages and educates young adults through four different programs designed to increase their political acumen and encourage civic action.

FCNL launched its annual Spring Lobby Weekend in 2006, bringing at first a few young adults to Capitol Hill – and eventually hundreds of people from all over the country – to advocate on one important federal issue each year, an issue that is a priority for Friends. Every year, this issue is chosen carefully and strategically, based on what is moving in Congress at the time and where we assess we will have the most influence. Spring Lobby Weekend is a three-day training in policy and advocacy skills, followed by a lobby day on Capitol Hill.

In 2015, FCNL expanded its Young Adult Program to include an eight-week summer internship for students and young adults from 18 to 23 years old. Interns are introduced to federal policy, grassroots organizing, and nonprofit management. Tasks range from researching and consolidating information about members of Congress, delivering letters to Hill offices, drafting action alerts, and coordinating letter-to-the-editor campaigns. Interns are also encouraged to attend forums at think tanks, congressional briefings, coalition meetings, and other networking events.

2015 was also the year that FCNL launched a ten-month program in which young adults between the ages of 19 and 30 work to organize their local communities around federal legislation prioritized by Friends. These Advocacy Corps organizers – from diverse cultural, geographic, and socioeconomic backgrounds – connect local activists and leaders with members of Congress to affect big, long-term change. Advocacy Corps members take part in a week-long immersive training in community organizing, media outreach, and lobbying, before they go back into their communities to make a difference. They commit to twenty-five hours of work per month and receive a stipend for it. Here are some of their stories:

Bobby Trice’s journey has included three of FCNL’s four young adult roles. Having served as a Spring Lobby Weekend attendee and Advocacy Corps organizer from Warren Wilson College in North Carolina, Bobby began as Program Assistant for Quaker Outreach in August 2019. Since then, he’s trained hundreds of college students and Quakers to lobby Congress for a better world, traveling the country to engage Quakers and recruit for FCNL’s young adult programs. 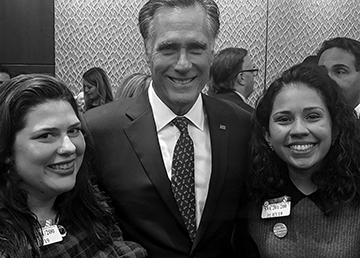 “Beyond lobbying and changing public policy, FCNL’s civic education is a ministry to the nation,” Trice says. “I was drawn to FCNL because of the organization’s investment in civic education. Not only did FCNL give me the tools and skills, it welcomed me into an advocacy and faith community with the hope and persistence to sustain change-making work.”

Since completing his fellowship, Bobby now serves as FCNL’s Quaker Engagement Associate, working to cultivate relationships with Friends and other FCNL constituents. He is FCNL’s first point of contact for Friends, and he fosters open channels of communication between FCNL and the wider Quaker world.

“Two years ago, I was a politically apathetic atheist. Today, I’m a professional advocacy organizer with FCNL and a practicing Quaker,” Bobby said. “FCNL’s investment in young adults and in me has been educational, profession-building, religiously grounded, and deeply spiritual.”

Another FCNL alumnus, Emmet Hollingshead, served as Program Assistant for Militarism and Human Rights from 2018 to 2019. He was impressed by the extent to which FCNL’s program assistants were treated as full members of the staff and are brought into decision-making processes about policy advocacy. “As someone coming right out of college, there was an expectation of basic intern work, but I’ve been surprised by how substantive the program is,” he said.

As a former-program-assistant-turned-permanent-staff-member, I see very clearly the dual focus at the core of FCNL’s young adult programs – civic education and an important emphasis on skills-building to help young adults become life-long, effective advocates. With a lobbying effort that is grounded in the faith and actions of Friends, FCNL practices what it preaches. Having grown up non-religious, seeing FCNL leverage faith to support positive stances on policy is a vision that continues to excite me. It was my first exposure to using one’s spiritual practice to advance social justice.

I have felt inspired watching FCNL evolve quickly, yet thoughtfully, to address current challenges. Across the board, the Young Adult Program has been altered due to the COVID-19 pandemic. For example, Spring Lobby Weekend 2020 was forced to pivot, two weeks before it started, into a virtual event. Undeterred, hundreds of young advocates from all around the U.S. still brought a clear and compelling message to Capitol Hill, urging Congress to pass carbon-pricing legislation that will reduce greenhouse gas emissions and protect vulnerable communities.

In August, the week-long Washington Summer Intensive for the Advocacy Corps was conducted virtually. Due to the pandemic, Advocacy Core members will organize their communities online to work on changes to our immigration laws. 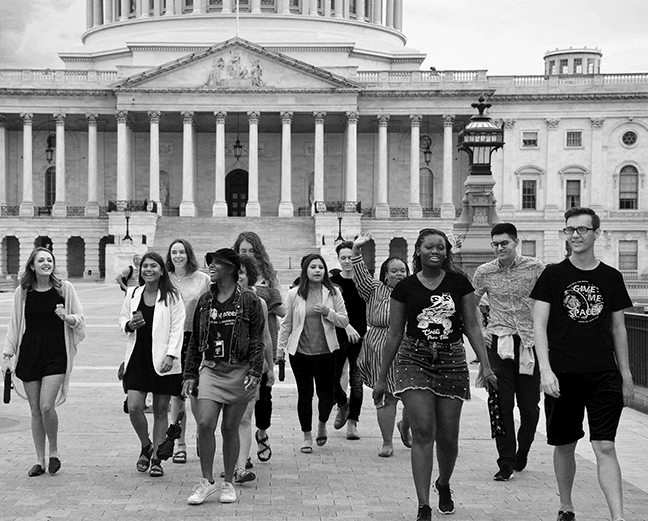 FCNL is also evolving in the ways it talks about racism. Last year, the Washington Summer Intensive included a conversation dedicated solely to race and racism, and how each organizer interacts with these issues. We repeated the conversation this year, with the help of a former Advocacy Corps organizer who has dedicated much of her work to these issues. FCNL continues to create more and more space within its young adult network to have dialogues on racial tensions.

Young adults are hungry for tools to respond to current events and contribute to social justice movements. FCNL’s value is that it offers them the tools necessary to effectively engage with the legislative process and to lobby for legislative action. With many young adults already exploring forms of protest, art, and direct service to enact change, it is crucial that FCNL understands how to build on their experiences and contribute to their development as changemakers through the training and civic education it offers.

For some young adults, FCNL represents an inaugural voyage into the world of advocacy for peace, social justice, and the environment. What matters most is that FCNL’s civic education serves to empower young advocates, no matter where they are on their journey toward understanding and participating in the political process. Throughout our journeys, FCNL helps us realize the power of our voices.  ~~~~