Driving as a Spiritual Discipline 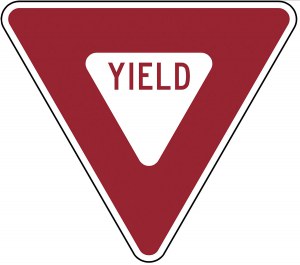 During the March 2014 gathering of the Friends World Committee for Consultation, I stayed with other Friends at a hostel where we had a bible study each morning before breakfast. Not long ago, I was rather averse to bible study, but I have come to value it immensely when it’s read as Friends often do – “in the Spirit” – sharing how the passages speak to us individually. It was after such a session that I found myself pondering how following traffic laws might be a good spiritual practice.

After reading a chapter that included some discussion of adherence to Jewish law, I realized that many of the reasons I ignore traffic laws are similar to reasons I ignore nudges from God. These include: inattention, being in a hurry, conforming to the expectations of others, following my own will, and simply being distracted.

I decided to try practicing obedience to traffic laws as a spiritual discipline. My first two-hour experience with this practice was far richer than I ever would have imagined.

Slowing down: One of the most challenging times to adhere to the speed limit was when I gained momentum driving downhill. Noticing this reminded me of a spiritual advice I’ve often heard: slowing down is a key aspect of listening to God.

Conformity: Another difficulty I encountered was sensing the cars piling up behind me on the two-lane road and the pressure I felt from being so out-of-sync with them. I began to think about how often I am swayed into conformity in everyday life, when I feel pressure to be in sync with those around me.

Distraction: After I picked up my kids from their classes, I kept finding that when I was talking with them, I would end up driving a few miles over the speed limit. Thinking about the challenges posed by conformity and by distraction, I realized that practicing spiritual discipline alone is good, but practicing with others is where the real discipline comes in. Early Friends showed great wisdom when they chose to place high value on the role of community. There are the many ways that working and living with others tests our spiritual discipline. Then, of course, there are many ways practicing with others can also give us the support we need to reach our full spiritual potential.

All of this came out of two short hours of conscious obedience to traffic laws. It seems this spiritual discipline holds a lot more promise for me than I originally expected. I look forward to discovering just how many ways it will help me pay better attention to discern and yield to God’s will. ~~~

Kathy Runyan is a member of Santa Cruz Friends Meeting (PYM), a co-director of Ben Lomond Quaker Center with her husband Bob, and the mother of three grown sons. She enjoys driving to Quaker Meetings throughout the West as part of her calling to take “Quakcer Center on the Road.”