Skip to main content
View other articles in "On Insight" issue of magazine.
March 2017, April 2017

Numerous people around the world do not identify with the gender that they were assigned at birth, yet the media tend to focus on one story: There is a teenager who always knew that something was off in their life from a young age. They came to realize that they are transgender (only ever falling under the gender binary of male or female) and then come out to their parents, who either accept them or take some time to do so. This story is told again and again; there’s nothing invalid about it. But it is important to look at other stories as well, to see the full picture of what it is to not be cisgender. Since I am currently in the middle of my own personal journey towards finding my gender, I am sharing my story here as one that does not fit the stereotype.

It is important to begin any discussion of gender by talking about what gender is. Gender is an internal sense of self and is different from biological sex because gender refers to how someone self-identifies, whereas biological sex refers to someone’s anatomy. Gender is built on a society’s views of how people take on different gender roles and present themselves. Because gender only exists in society, it is a societal construct that changes from person to person. This allows us to acknowledge an infinite number of genders and the fact that, for many people, gender exists on a spectrum or with fluidity.  Everyone’s relationship with their gender is their own individual experience.

On their journey with gender identity, many people experience gender dysphoria. This, like almost everything gender related, varies from person to person. In my experience, gender dysphoria has been questioning who I want to see in the mirror and what gender I am. It is looking in the mirror and sometimes loving looking masculine or feminine, and other times wanting to look less or more of both. This is often very existential for me and is a very hard feeling to comprehend and describe.

Since gender dysphoria is experienced uniquely by each person, I asked a few people about their experiences with it. One of these people was Phoenix Noder, who currently identifies as a demi-male, which for him means that he sometimes falls outside of the gender binary of male or female, and sometimes is male. He describes gender dysphoria as, “Getting trapped in my own mind and like going over and over and over, I’m almost denying myself in a way.” The way that Oliver Willson, a transgender male, describes his gender dysphoria is this, “It’s just being uncomfortable with your own body, it’s just like being disgusted with what you’re in and wishing you could change that, there are a lot of times it just causes a lot of distress. I’ve cried over it a number of times because you know, it’s just how it goes, it’s an immense amount of discomfort if anything which is, you know, is basically what it is defined as.” 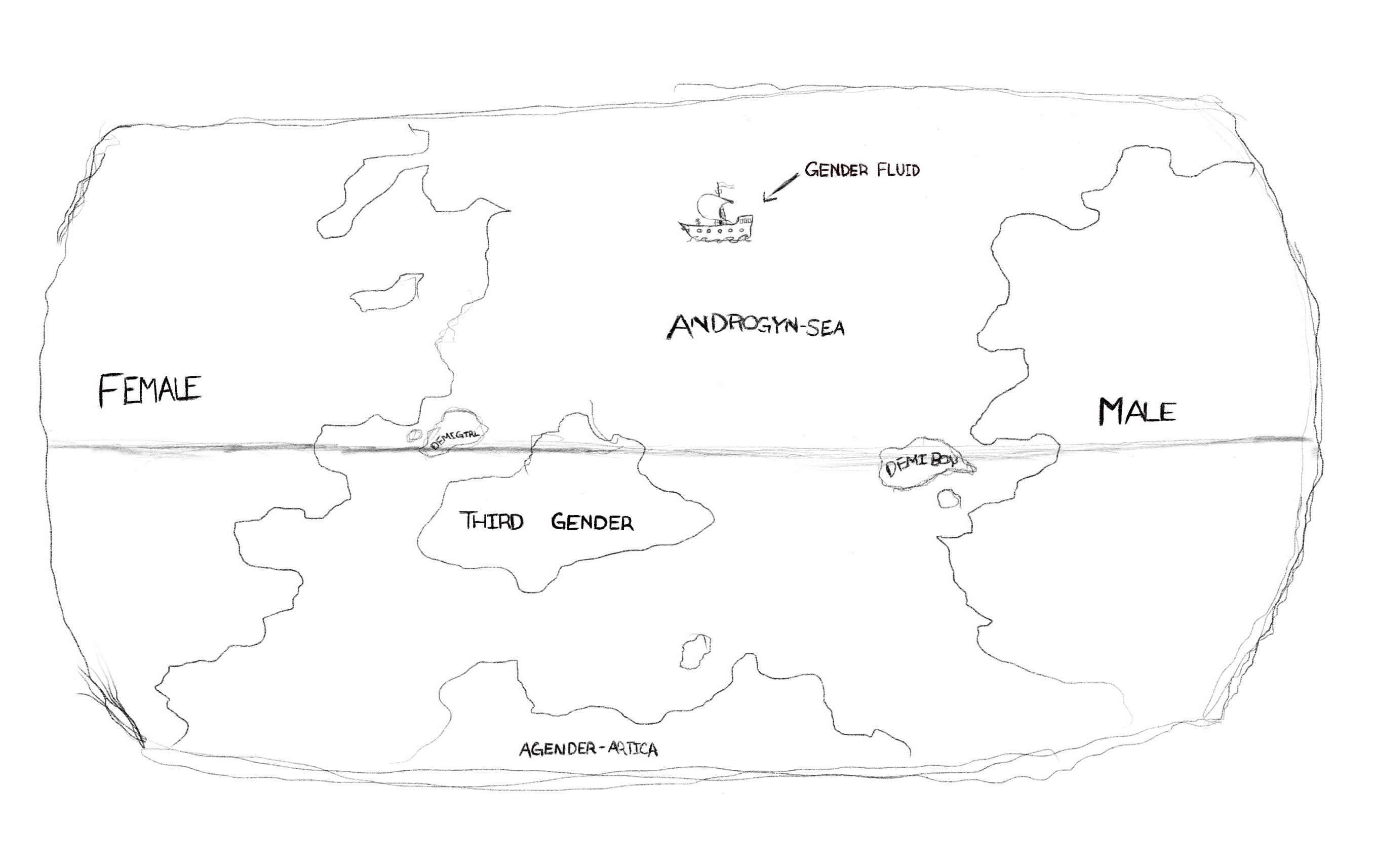 There is a metaphor that has helped me to comprehend my own gender better, which is called the Gender Planet. The Gender Planet is a way to visualize gender, and everyone’s “planet” can be different. The way it works is each continent represents a different gender. Some people live on one continent their whole life, and never leave it. Other people move between continents. Each continent has its own language, the equivalent of gender expression. People can speak whatever language they are comfortable with on any continent, or they can change their language depending on their location. The other thing that the Gender Planet can measure is how connected someone feels to their gender. The equator on my Gender Planet represents where I feel most connected to my gender. However, if I were to feel no connection to any gender, I would be closer to the North or South Pole. My gender tends to move with fluidity and this concept has really helped me understand that movement.

In general, finding gender and identity is a journey. In my experience, I have felt a lot of build up to a “eureka” moment. Until very recently, I have always had a strong sense that I am a girl, but lately that feeling has gone away. I have been experiencing a new dysphoria around my gender that I never have experienced before. I do not always know who I am because my gender changes from day to day. To give an example of how much my gender has changed in the past six months, I was on a road trip, and remember really thinking about what life would be like if I were male. I remember seeing my reflection in the side mirror of the car with my hair tied back in a way that it looked like it could be a short hairstyle and trying to see myself as a boy. I felt no connection at all with masculinity and that confirmed that I was a girl at the time. But my identity is fluid and constantly changing. A few months later, I found myself trying to find new ways to present in more androgynous ways. I thought that presenting more androgynously would match my orientation better, and I wanted to see if I could find myself more through that style.

For me there were two main events that really contributed to my gender. The first was my first time experiencing gender dysphoria. I still identified as cisgender at the time, so I did a lot of research into whether cisgender people could experience gender dysphoria. I decided to keep identifying as a girl at the time. A week or so later, I made plans with a friend who was also questioning their gender. We decided we would each present as the other binary gender than the one we were assigned at birth. I do not think I will ever forget the feeling that I got when I really felt masculine for the first time that day. I was not expecting to feel so comfortable as a boy, and it really shaped my gender into what it is currently, which for the time being, the best word is genderfluid. This means my gender changes from day to day.  One quote that has really lead me through this process is something that Lisa Toko-Ross said to me in an email, “What I would specify today may not be my Truth tomorrow.”

As you can see, just because media tend to focus on one story does not mean that story is the only one. It is important to know that, for many people, identity is not set in stone and may change over time, and that everyone’s gender is unique. ~~~