Skip to main content
View other articles in "On Heritage" issue of magazine.
July 2016, August 2016

Desire for Connection in Guatemala

It is so hard to escape teenage-land when you’re on a trip with nineteen other teenagers. Our Junior Friends Service Trip to Guatemala was full of silly dramas and crushes and a lot of very loud laughter. In my head, I was culturally sensitive, inquisitive, and open. But I’m not sure that’s how I appeared to the Guatemalans I met. We dressed respectfully, and I used my broken, beginner’s Spanish. We loved it all – and we didn’t quite know how to interact with any of it.

I turned sixteen in Guatemala. On my birthday, we excavated trash from the bank of a stream, from piles that were three feet deep. We got totally caked in mud. Then beautiful women served us beautiful food on the grass. And when we walked back to town, covered in mud, the children said, “Oh, shit! Ohhh, shit!” to see the gringos pass. That night, the hotel served us pasta – la comida americana – and two birthday cakes! And I found myself sitting in a circle humming with love, my heartstrings tied to twenty-three other hearts. 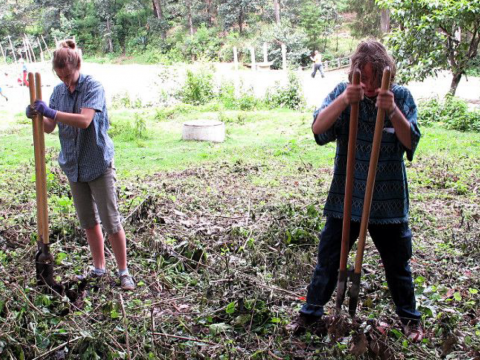 Two days in the middle of the trip, I spent with a “host family,” along with another girl from our group. When we arrived, our new “sister” taught us to make tortillas, and we took turns caring for her baby. On the second day, we helped the family plant trees. When it was time to head back to the town center for the next part of our trip, our “sister” helped carry our luggage.

Once we got into town, we said a lot of  “thank you” and “good bye.” I told my sisters that we would always be friends. We hugged, and we three girls started crying. It was strange, crying about people I had only known for two days. We could barely even communicate with words! But we had cooked together, lived together, and took care of each other. And in less than two days, we came to love each other. So, we cried.

The churches in Guatemala are old and gorgeous. I remember the first Catholic Church we visited, in Tecpan. It was as if I could feel the centuries of people coming to seek God there. I am not Christian (although I was raised going to Quaker meeting and the Lutheran church), but the old, honest spirituality of those churches affected me in a way that no meetinghouse has. The blend of indigenous culture and spirituality (mostly Mayan) with Catholicism is strange and beautiful. I had always believed the Catholic Church to be very strict when it comes to tradition, but in Guatemala, the Mayan spirituality seeps into the old churches. The result is a beautiful adaptation of a faith that seems to fit in right into this country.

When our guide, Doña Angelina, shared a Mayan ceremony with us, we were all struck by the ways that Quakerism and Mayan spirituality overlap. At one point during the ceremony, she invited us to each throw a piece of wood into the fire, and as we did, to release any negativity or hesitation that we were feeling. This mirrored almost exactly a tradition in the closing circle of our Quaker summer camping trips, a tradition that we hold dear, where we throw sticks of gratitude/love/fear/hope into the fire. I think a lot about how every faith has at its core a desire for connection with something greater than oneself.

In the past month or so, I have been thinking about some of the discomfort I feel with the way we interacted with Guatemalans and their culture. I feel uncomfortable with the fact that I taught English to students who were the same age as me. Despite the fact that Guatemalan schools are now required by the state to teach English, and that English is often considered a “liberating” language because it can make advanced education and good jobs more accessible, I felt that by teaching English, I was contributing to the American tradition of imperialism. I am concerned that I was perpetuating Western ideas of success, which may be harmful to the already eroding traditional culture of Guatemala. Many parts of the trip felt to me less like a cultural exchange and more like a cultural dump. Even though I was absorbing huge amounts of Guatemalan culture and I learned a lot, I worry that my position as a “teacher” caused a power dynamic where American culture was valued over Guatemalan culture. 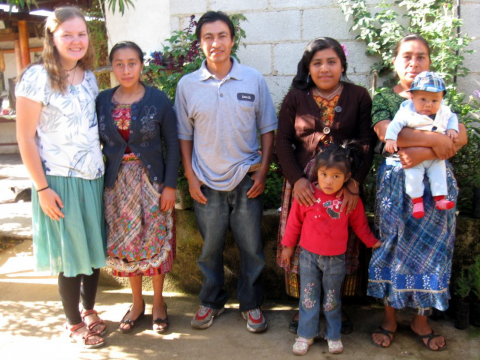 My whole life, I have struggled with the testimony of Simplicity. This trip proved to me that simplicity fosters community, love, and sharing. It would not be fair for me to say that Guatemalans are happier overall than Americans – I only visited for eleven days – but I do believe that Guatemalan culture places a higher value on what one already has and on the people one is surrounded by, much more than U.S. culture does.

On our last day in Guatemala, I read a poem by another member of our group, written during our trip. It said, essentially, that Guatemala stays special even when it’s full of tourists. That’s right. The obnoxious tourists (not exactly excluding myself) can’t take away the beauty and grace of Guatemala.

The main shock I felt from my re-entry into the U.S. was from seeing how brisk and rude some people are here (airport security, for example). In Guatemala, everyone we met was lovely and welcoming. I don’t want to go back to ignoring everyone I walk by and never making eye contact.

Notes to Future Self:

Hannah Billen attends South Seattle Meeting (NPYM). She has been a leader in several Quaker camps and service trips, and she is looking forward to starting life as a Guilford student this fall.