Skip to main content
View other articles in "On Art" issue of magazine.
March 2020, April 2020

Craftivism is craft plus activism. It is creating and sharing art that expresses a political or social message. Writer and activist Betsy Greer coined the term in 2003, and since then, it has spread around the world. Many activists share testimonials about the ways that craftivism has changed their lives, making them calmer and happier people. 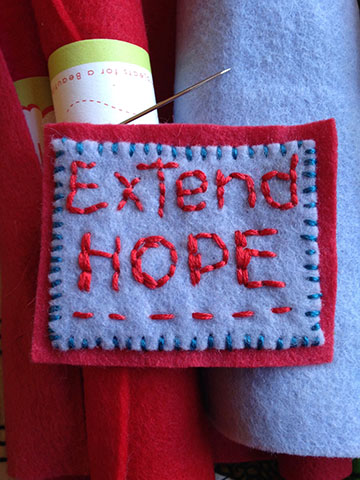 I didn’t enter craftivism from the world of political campaigning and social activism; rather, I came from the other direction. I’ve been a craftsperson all my life. I only became an activist recently, under duress of the spirit. As an introvert, activism is often a painful challenge for me; my leadings take me to uncomfortable places – into prisons and standing to speak at city council meetings. Between challenging moments like these, craftivism allows me to rest with a paintbrush, or a needle and thread.

My crafting makes my activism sustainable; it allows me to slow down, think deeply about issues, and share my passion creatively. It’s a way to voice my opinions visually and with great power. I see three steps in the process: Craftivists have to think of the message they want to share, along with a visual way to represent it; then they need to create the art; and then get the art into a public space.

Craftivism includes any “crafty” art, such as cross-stitch, knitting, stamping, screen-printing, and banner painting. Craftivism often takes place as a social event, with people working together to make art that is beautiful and impactful. 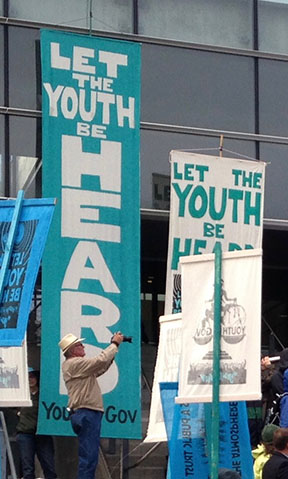 I got hooked in 2018 when the climate group 350 Eugene asked for volunteers to paint a large banner for an upcoming event. The artist in charge had already drawn the banner on a piece of cloth, and it was stapled to plywood. She had the paints mixed, and all we had to do was basically paint by numbers. This turned out to be a soothing activity in a relaxed social atmosphere, and I made some new friends that day.

Since then, I’ve worked on small craftivism projects, like painted rocks and stamped pins, and I’ve also worked on some really large projects, like the 20-foot-tall banners that 350 made for recent “Youth-v-Gov” rallies. I’ve done craftivism in living rooms with a handful of friends and in warehouses with scores of volunteers.

Hanging out with climate activists while painting banners led me to educate myself on the climate crisis, which led to more involvement in the climate justice movement. I’m currently the Eugene Friends Meeting representative to the Eugene Community Climate Coalition, and I’m part of a 350 advocacy group called Climate Revolutions by Bike.

My commitment to the 350 climate campaign came slowly, but the testimony of plain living was strong in me even before I was a Quaker. Ever since I was a student, I have lived on modest means, working as an artist, buying second-hand clothing and furniture, and so on. Probably the biggest “plain living” decision my husband and I made was to live without a car. We bike, we walk, we bus, and we car-pool often. Living without a car sprang from our desire to not add to or be a part of the urban crises of pollution, noise, and congestion. We raised both our children (mostly) without a car. 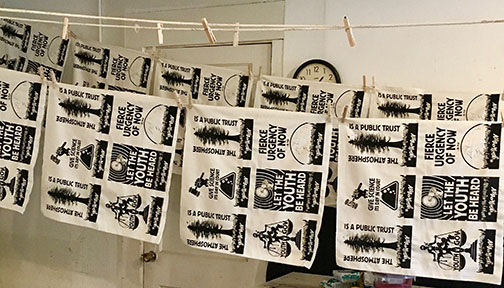 Like many climate activists before me, I’m alarmed by the statistics. I have known for years the climate is changing, but now I really know, and I’m sometimes in danger of being sucked up by despair over the vastness of the problem. I’ve always been the quiet support person for the activists in our Quaker meeting, but now I understand their frustration and sense of urgency. Fortunately, I have a strong system in place to help me stay grounded: I have my slow-paced lifestyle; I have my community of
Friends and my family; I have a relationship with a sustaining source of peace; and I have my arts and crafts – including my craftivism.

If you want to see some of these craftivism projects and processes in more detail, check out my Climate Craftivism blog at https://climatecraftivism.blogspot.com.  ~~~

Cynthia Black is an artist, art teacher, mother of two adult children, and soon to be a grandmother. She is a member of Eugene Friends Meeting (NPYM), and is serving as co-clerk of the meeting.

All photos that accompany this article are from Cynthia Black. 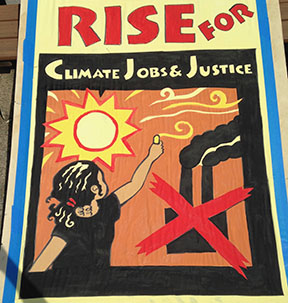 It is clear to climate activists that Wall Street is financing the climate crisis. Stopping this money pipeline is one of the most important ways we can address the climate emergency. In the wake of a youth-led action campaign that called for a more sustainable, low-carbon economy, the recent decision by BlackRock to divest from coal and to prioritize sustainability shows that we are able to motivate change.

This spring, organizations all around the country will focus on actions directed at Chase, BlackRock, Wells Fargo, and Liberty Mutual. The campaign will involve a number of tactics, including demonstrations at local branches, letter writing, education about fossil fuel financing and about banking alternatives, and cutting up credit cards from banks that finance fossil fuels. The spring campaign will culminate in a nation-wide day of actions at hundreds of CHASE branches on April 23rd, the 50th anniversary of Earth Day. Check out plans by your local climate action groups and get involved!