Skip to main content
View other articles in "On Garbage" issue of magazine.
November 2017, December 2017

Chickens on the Cheap

Ever since we moved to rural Honduras in 2006, Sister Alegría and I had wanted chickens. Our imaginations became reality when, in 2012, friends gave us some pullets and a young rooster. We quickly discovered that raising fowl wasn’t so straightforward. The second night the birds were here, perching in the branches of a tree, a possum helped himself to the rooster! Some months later, a vampire bat killed one of the hens. Eventually, our friend Mateo built a henhouse in the backyard so the chickens could sleep protected from nighttime predators.

After that, everything was dandy for several months as we ate eggs regularly. Then one day at noon, I heard the rooster make a ruckus, and I found a trail of feathers going down the hillside. A wildcat had nabbed him! This sneaky animal returned each month for another meal, often when we were just thinking we’d like to make some chicken soup for ourselves.

In 2014, when our flock was completely decimated, we knew something had to change. We decided to try raising layers, which can tolerate being enclosed in the daytime. Once they start laying, if they are fed well, layer hens will lay one egg a day without pause. We were pleased with the egg production of these new hens. In fact, there were so many eggs that we began carrying what we didn’t eat ourselves to Limón each week to sell and help pay for chicken food. Then we discovered that after about a year of laying, they slow down. We would have to raise a new set of chicks each year to replace the aging hens. But chickens don’t cohabitate well if they didn’t grow up together. We would need to raise the new birds someplace where they would be protected from the old hens as well as wild predators.

One of our tropical agriculture books has an illustration of a “chicken tractor,” a floorless chicken coop that can be moved around the yard so the birds inside can forage and still be safe from attack. We took the picture in this book as our model. Now to obtain the components.

One day as we walked home from Limón, past the municipal dump, we spotted some ¼-inch screen material. We rolled it up and took it home. Then we made a plan to go to the dump expressly to collect stuff. The next Monday, we had a productive time scavenging. We hiked the hour back to the monastery loaded with goodies: pieces of corrugated sheet metal, a square of heavy tarp, a broom head. I set to work on building the chicken tractor. 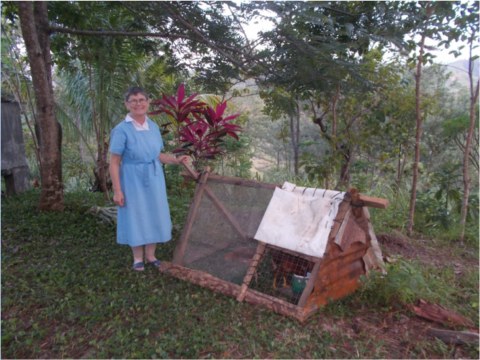 After much hammering and wire bending: Voilà! A portable coop for our growing chicks! We move it every three or four days to a new patch of lawn. The chicks eat leaves and hunt for insects. Their waste is messy on the ground for a while, but it fertilizes the yard, enriching our poor, acidic soil.

Sister Alegría and I have been very satisfied with this chicken coop that was cobbled together from scavenged material. Since all the parts are used, they deteriorate quickly and unevenly; so keeping an eye out for problems and making repairs are regular parts of its upkeep. We are pleased that we can reuse items that others consider trash, items that would instead pollute the ground and the air, since the garbage at the dump is eventually burned. Instead, the utility of this “trash” has been extended and has made our chicken experiment possible. We now have seven hens, one young rooster, six growing chicks, and plenty of eggs.  ~~~

This story was abridged from a longer version that contains additional twists and more great photos. Find the complete version at: westernfriend.org/media/chickens-cheap-unabridged.

Amigas del Señor Monastery shares in a Covenant of Caring with Multnomah Monthly Meeting in Portland, OR (NPYM). More adventures from Sister Confianza and Sister Alegría’s life are told in their newest book, Giving Up Something Good for Something Better, available at: westernfriend.org/books.