Skip to main content
View other articles in "On Weapons" issue of magazine.
January 2019, February 2019

Val Liveoak recently shared with Western Friend the text of her keynote presentation to 2018 PeaceQuest, which is online at: westernfriend.org/media/friends-peace-teams-our-history. The following is a compilation of some excerpts from that text.

At the the Friends General Conference Gathering of 1993, David Hartsough (then with American Friends Service Committee) convened a group to consider Quaker responses to armed conflict. About forty of us came together to consider what Friends could do. We saw that the sort of “peace keeping” actions conducted by the U.N. were only another kind of war. We met several times during that week to ponder possible responses to: “How can Friends respond to the many crises in our world?” and “How can we wage peace?” We determined to meet again and convened a consultative group in Philadelphia that November. As a result, in January 1994, Mary Lord and Elise Boulding undertook to be the founding co-clerks of the “Friends Peace Team Project.” 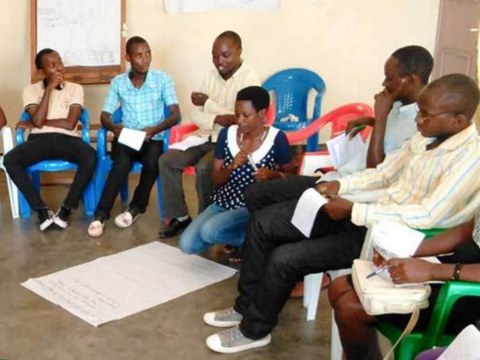 For the next five years, we met about twice a year. We spent much of that time looking for clarity on what to do and how to do it. We dealt with organizational questions and made connections with more-established groups. In 1998, David Zarembka organized an exploratory team to Central East Africa, which turned into our African Great Lakes Initiative. It became our major project, working in Rwanda, Burundi, Kenya, Congo, and Uganda to bring divided communities together for reconciliation, healing, and building trust.

In 2002, I organized an exploratory team to Colombia, South America. In 2007, our exploratory team went to Central America. Eventually, we formed a project, “Peacebuilding en las Américas,” that works in Colombia, Guatemala, El Salvador, and Honduras. I coordinated this work until my retirement in 2016.

Nadine Hoover brought her work in Indonesia to Friends Peace Teams in 2007. That work has since expanded to include numerous locations, including Nepal, South Korea, the Philippines, Australia, New Zealand, and Papua New Guinea.

There have certainly been growing pains during our twenty-five years. At times, we’ve struggled with conflict and disagreement. At our best, we’ve been able to find unity in the Spirit, and move forward together. But over this time, some Friends have left the group.

We have excelled, I think, in creating and upholding relationships with our partner groups abroad. We have indeed made and been friends to people in areas of great conflict and supported peace builders who face tremendous challenges.

Friends and others ask: “Why aren’t you working in blank, blank, blank?” The blanks are filled in with certain groups, regions, or problems. We’ve learned, I think, to respond with: “Friend, if you are led to work in blank, blank, blank, please come to us with your concern and let us see if we can support your work.”

Wise Friends from the past have counseled that we are not called to do everything. My friends in Latin America say, “Each person must put in their little grain of sand.” I am proud to have been praised by a colleague who said that, through Peacebuilding en las Américas, I had actually put in a grain of gold. I believe we will continue to be faithful to our vision of Friends Peace Teams as we hone our skills in discernment of and support for the leadings of the Spirit. ~~~

Val Liveoak is the emerita coordinator of Peacebuilding en las Américas, an initiative of Friends Peace Teams. She is a member of San Antonio Friends Meeting (South Central Yearly Meeting).