An interview with Adriana Jasso by Greg Elliott

Adriana Jasso is the U.S./Mexico Program Coordinator for American Friends Service Committee in San Diego. She was interviewed in November 2015 by Greg Elliott, who is the Friends Relations Associate with the AFSC in Philadelphia. The following text is an edited transcript of portions of that interview.

Greg Elliott:  How would you describe the realities along the U.S./Mexico border to someone who has never been there?

So within those hundred miles in San Diego County, we see racial profiling take place. The people who get questioned, who get asked to step out of their vehicle, or who get taken for further questioning, all of them happen to be of a certain ethnicity, a certain skin color.

One of the instances that comes to mind, when I think of the fear that these practices create, comes from early 2002.  Right after 9/11, the Border Patrol in San Diego and the surrounding communities decided that they needed to find threats or “terrorists” on the Trolley, a light-rail system and public transportation. So at any given time for about three weeks, you saw Border Patrol getting on the Trolley and questioning people about their status. This created a serious crisis, specifically for working class people who were using public transportation to get to and from work. In some communities, people refused to take public transportation for months, in fear that they would come into contact with federal authorities. They were living in fear that they could leave home in the morning to go to work, but they might not make it home at the end of the day.

The devastation of deportation is seen every day in this border reality.  Over two million deportations have taken place during the Obama administration, and this has created tremendous damage and trauma for millions of people – not just for the people who were thrown out of the country, but also for their families, their loved ones, and their communities. It is manifested daily in the lives of children who can’t have a home together with their parents, because one or both of their parents have been deported.

GE:  How do the communities that have been existing with this reality for decades find the ability to live with it? 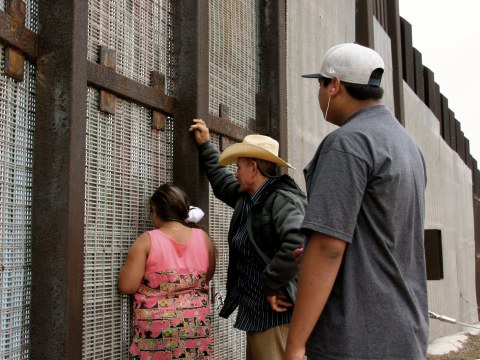 AJ:  There is a place on the U.S./Mexico border in Southern California that is officially called “Border Field State Park,” but it has the popular name of “El Parque de La Amistad” or “Friendship Park” in English. Before 2008, there was only one fence along the border. After 2008, now we have two fences. There is a space in between the two fences that people on the U.S. side are able to access on Saturdays and Sundays for about four hours. And families who have been separated will make the trip from the U.S. side, and a father or a mother will meet them from the Mexican side, and that’s where you can say that love and hope manifests itself quite often.

We have had people coming from as far away as Oregon to meet with their loved ones on the Mexico side, who have come from as far away as the state of Michoacán. When you think of the resources and the time that it takes to make those trips to see a loved one, it’s incredible.

GE:  What about the historical context of the border?

AJ:  Historical memory is part of the current reality. In fact, one of the well-known slogans of migrant-rights groups here is: “We didn’t cross the border; the border crossed us.” So the memory of how the political borders of the U.S. were established through expansion and war is very much a part of the memory of the people who have lived in these communities for generations. That is the historical context of what is now known as the border of the United States, that it was established through violence.

GE:  So what are some of the programs that AFSC is working on now, to help confront these day-to-day injustices and fears?

AJ:  We have four main areas of work here in San Diego. First, we have the area of documentation of abuses, mainly of people who have suffered from some type of abuse when they have come into contact with a federal agent, whether that’s Border Patrol or some other federal agency. Last summer, we joined a border-wide documentation campaign called Cruce con Dignidad, which included working with organizations in Southern California, Arizona, New Mexico, and Texas. The campaign’s main objective was to gather fifty documented cases of abuses per region within a month. When we began to document cases, it became more and more obvious that fear plays a big role in the daily lives of our border community.

Another area of our work is policy work, which has to do with what happens – if something ever happens – in federal immigration reform. We share policy and legislative developments with the community, specifically how these developments affect the border region. And we participate in campaigns to affect public policies. For example, we participated in the national effort to defeat Louisiana Senator David Vitter’s initiative to deny funding to local governments that limit their collaboration with federal immigration authorities. However, when it comes to federal immigration reform legislation, the uphill battle is a constant. The tendency in Washington is to present border communities as dangerous and out of control, and propose more aggressive enforcement, higher walls, and millions of dollars in spending to create the illusion of security.

The third area of our work is building local alliances with organizations that do similar work as our program. There are only three of us here at the AFSC office in San Diego, so sometimes the main question of the day is human resources, when it comes to planning and also amplifying the work of migrant justice and human rights. For this reason, we have worked in the creation of numerous statewide and regional alliances.

The fourth area of our work is community base-building. We do this by supporting human rights committees throughout the county, which we have been doing for about ten years. The human rights committees vary, depending on the needs of each community. For example, in the city of Escondido, the constant struggle is against a police department that enjoys the presence of ICE [Immigration and Custom Enforcement] and directly collaborates with ICE agents. In the city of Vista, the struggle is to protect the rights of farm workers, maybe helping them ask for medical attention or maybe supporting them to denounce salary theft. The human rights committees are also essential when we need to mobilize people around a particular issue.

GE: And how do you mobilize the support of people who don’t live in close proximity to the border, yet they still want to get involved and try to make change?

AJ: Now with technology and social media, we don’t have the challenges that we had before to get the news out to the general public about what is happening in border communities. It’s gotten easier and faster to connect. We are relying more and more on social media to change the narrative about migration issues and to ask people to take action. For people who are not immediate to the border, there are ways for them to express their solidarity with border communities by speaking out against proposals from politicians to repress migrants and to bring more enforcement and militarization to the border.

GE: Recently, the news has been full of photos and stories of Syrian refugees, terrorist attacks, and anti-Islamic racism. What connections do you see between these events and migration across the US/Mexico border?

AJ: The more we think of migration as a global reality, and the more we think of it in terms of how we are connected and how human migration has always been part of people’s histories, the more these issues can come into focus for us. When we see images of the Syrian crisis, of hundreds of thousands of people looking for survival, looking for hope, I think we share a human responsibility to place ourselves for a minute in the shoes of those mothers and fathers and children. Similarly, the Central American refugee crisis that took place in the U.S. last year is not a distant memory. That crisis also presented us with very similar images of children and women fighting for their survival, trying to get to safety.

The reality of human migration has always existed and will continue to exist, so the question is: Do we contribute to ensuring that people find a welcoming community or do we turn people away? In the case of Central American refugees and Syrian refugees, the need to migrate was not a “want.” People did not get up one morning and say, “I think I’m leaving home.” These mass migrations are caused by incredibly difficult political and violent realities, and I think we all have a responsibility to be reflective and think about what we can do to be welcoming and loving to those who are in need of a welcoming and loving hand.  ~~~