Skip to main content
View other articles in "On Reconciliation" issue of magazine.
January 2015, February 2015

On a quiet residential street in the heart of Mexico City, in the former home and studio of the noted muralist Jose Clemente Orozco, your find a modest Quaker institution. To the casual observer, this is a spacious residence, frequented occasionally by young foreigners. It appears at various times to be a home, a guesthouse, or a community center. It is, in fact, a quiet non-profit with a unique flavor, Casa de Los Amigos.

The Casa welcomes refugees from destruction (Haiti) and oppression (various African and Central American despots). It is a place that is safe, which is critical for visitors who lack official documents. It welcomes people who are lonely and desperate, and it teaches them the rudimentary skills of urban living. It also teaches enough basic Spanish for newcomers to get a first job in an alien culture. 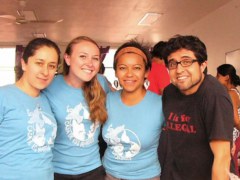 For some, the Casa is a portal of entry as unique as Ellis Island was in the early nineteenth century. It is a place where the cries of social injustice are heard, and it is a spot where the United Nations High Commissioner on Refugees can refer individuals who need help. That help is provided largely by volunteers from the U.S., under the guidance of a small paid staff.

Nicolas Wright traveled from Mexico City Friends Meeting in the fall of 2013 to visit La Jolla Friends Meeting, and he invited U.S. Friends to visit the Casa. With financial support from our meetings, Mary Jo Housman and I took Nico up on his invitation. We visited the Casa for six days in the spring of 2014. We stayed in the hostel and seldom left for sightseeing. We had ample opportunity to talk with guests, refugees, and staff.

It turned out that our visit occurred during the centenary of the birth of Octavio Paz, the distinguished poet and writer who won the Nobel Prize for Literature in 1990. He also served as a Mexican diplomat in France and Japan, and as Mexico’s Ambassador to India. We brought Paz’s highly regarded The Labyrinth of Solitude with us on our trip to the Casa, as well as his landmark essay, “Mexico and the United States.” Our study of those works and the public celebrations of Paz’s life both encouraged us to consider Paz’s observations about the differences between Mexico and the United States, which he deemed to be highly significant but largely invisible.

Paz’s essay, “Mexico and the United States,” was published in The New Yorker,  September 17, 1979. In this essay, Paz lists a number of invisible differences between our two side-by-side civilizations, including:

1) Our two cultures emerge from different histories of engagement with indigenous peoples by the European explorers and settlers who founded our two nations. The land that eventually became the United States was originally peopled by nomadic groups of warrior hunters. The land that would later become Mexico was inhabited by settled agricultural tribes with complex social and political institutions, headed by warlike theocracies, guided by unique cosmologies. In the United States, native people were excluded as “savages;” in Mexico, they were included as part of the world order.

In the northern parts of the American continent, conflicts over hunting areas regularly resulted in open hostility and warfare between European settlers and native peoples. Settlers saw only threats in the “savages” they encountered. “The only good Indian is a dead Indian” was a revealing mantra of that time. Eventually, the European settlers succeeded in excluding native peoples from mainstream society, most notably by forcing them to settle on reservations.

In Mexico, native peoples were incorporated into the mainstream. This inclusion is evident in the many ways that the entire life of Mexicans is steeped in Indian tradition: family, love, friendship, paternal relations, forms of civility, images of authority and power, visions of death, work, and festivity.  As Paz writes, “The Mesoamerican civilization died a violent death, but Mexico is Mexico thanks to the Indian presence.” Indeed, an Indian, Benito Juarez, once served as president of Mexico.

English Protestantism was exclusive, and it cut itself off from the native peoples of the American continent by physical exclusion and by extermination. The United States was founded on a land with a history that was not known, understood, or acknowledged by its founders. The historical memory of the dominant culture of the Untied States is largely European.

In contrast, Hispanic Catholicism was inclusive: conquest and domination were bound up with the ideas of conversion and assimilation. The Spaniards did in Mexico what the Roman Church had done in the Mediterranean basin – assimilate pagan gods and idols, and baptize them. Those gods and idols are barely hidden under a veneer of Christianity in Mexico today. As a consequence, Mexico is the most Spanish country in Latin America; at the same time, it is the most Indian. Indeed, Mexico is a land of two pasts: one European, one Indian. Mexico City is built on the ruins of the first great city of the American continent, the great city of the Aztecs and the Toltecs, built in the likeness of Teotihuacan. Because it had no Reformation and Enlightenment, Mexico (along with the rest of the Spanish empire) closed itself off from Europe and the modern world.

3) Our cultures differ in their views of time and the impacts that those views have on the development of our civilizations. The United States is a society oriented toward the future; Mexico is a society that sees its ideals in the past.

U.S. democracy is built upon the religious principles of the Reformation and upon the Enlightenment. The culture is forward-looking, generally welcomes criticism, and is generally open to change.

Mexico, without an Enlightenment, rejected the concept of criticism as a prelude to change and conserved the image of changelessness as an ideal. Utopia was not in the future, but was instead a return to the source, the beginning, the past. Even the most radical cohort in the Mexican Revolution, Emiliano Zapata and his peasant followers, wanted to go back to the pre-Columbian communal ownership of the land that had been respected by the Spaniards. Paz quotes the Mexican poet, Ramon Lopez Velarde:

Motherland, be still the same,
faithful to each day’s mirror.

Mary Jo and I pondered these insights of Octavio Paz during and after our stay at the Casa. We began to realize that we live next door to a neighbor we hardly know – except through headlines. In fact, many of us in the U.S. form our impressions of Mexico by likening the whole nation to our view of border towns. We anxiously ponder our shared 2,000-mile border and listen to our elected representatives consider whether to fence it or to arm it. We focus our attention on people fleeing north, people trying to cross the border along its most remote sections.

The dominant culture of the United States holds a patronizing disdain for Mexico.  We scorn Mexican mordidas, bribes, while closing our eyes to their economic and political equivalents in our own country. We worry about the formidable power of Mexican drug cartels and the associated violence. We disdain what we call the Mexican “macho” approach to women, while we confine our own interactions with Mexicans largely to transactions in which they wait on us or work for us. In San Diego, we don’t even bother trying to pronounce properly the name of the Mexican city that is just across the road, Tijuana.

In contrast, we found at Casa de los Amigos a staff of young U.S. citizens dealing with some of the most painful problems in Mexico and not dependent upon interpreters to do so. They are dedicated, informed, insightful, and articulate. Casa de los Amigos is a crucial outreach effort by a part of our widespread Pacific Yearly Meeting. Yet this work is also more than mere “outreach” in Mexico. The Casa provides those of us in the U.S. with timely, believable, and authentic information about a neighbor with whom we would like to be better acquainted, a neighbor far more different from us than we would have guessed, and far more important to us than we should ignore. The Casa has few, if any, parallels. And it reflects our Quaker values.

The Casa is a place where differences between cultures can be recognized and engaged. It is a place where new possibilities of relationships can be explored and realized. As such, it is an existent, growing model of diverse Quaker action, aimed quite simply at making the world a better place.

It would be a major error to think that all it takes for an English-speaking U.S. citizen to communicate with individuals and institutions in Mexico is a couple of years of Spanish classes. There’s a lot more to it than that. The Casa is located not simply in Mexico City, not simply in another country, but at a rare junction of two distinct civilizations. The staff and volunteers at the Casa are precious resources who can help us break through the fog of a violent border that limits our view of Mexico, our neighbor. As a result of our visit, Mary Jo and I are traveling to monthly meetings throughout Southern California Quarterly Meeting, urging vigorous intervisitation between SCQM meetings and the Casa. We Friends in the U.S. need the Casa as much as they need us.  ~~~

Burton Housman, a member of La Jolla Friends Meeting (PYM), and Mary Jo Housman, a member of Orange Grove Friends Meeting (PYM), are traveling with a minute from La Jolla Friends Meeting to promote vigorous intervisitation between Southern California Quarterly Meeting and Casa de los Amigos. With the help of a support committee of Friends from La Jolla Meeting, Orange Grove Meeting, and Mexico City Meeting, the Housmans are traveling to urge meetings in the U.S. to invite Friends from the Casa to visit them, to send volunteers to work at the Casa, and to support the Casa financially. For more information about the Casa, see: casadelosamigos.org.