All Against the Haul

Susan Estep is a founding member of All Against the Haul, an environmental action coalition supported by Friends in Montana. It was formed to stop the construction of a permanent industrial corridor for massively oversized loads of oil production equipment – longer-than-a-football-field megaloads – through Oregon, Washington, Idaho, and Montana to the Alberta Tar Sands mine. Susan spoke by phone with Western Friend on October 23, 2014. Following are edited excerpts from a transcript of that interview.

Western Friend: Would you start off by filling us in on All Against the Haul – how it was formed, and why it was formed?

Susan Estep: All Against the Haul started in 2010 as a result of a five-day trip sponsored by the Women’s Donors Network. A group of women came to Montana to look at the impact of environmental policy on the indigenous people here. I was one of the organizers of that trip. As you may or may not know about Montana, we’re a big coal state. We have a history of our natural resources being pillaged by large corporate America, and the indigenous people getting the worst of it.

So during the course of that week, we sponsored a lecture on the Blackfoot Reservation. We didn’t know what the topic would be, but it turned out to be the Alberta Tar Sands. There was a general lack of awareness in our group about what was happening in Canada at the Tar Sands, in terms of how that mining is done, its impacts on the tribes up there, and its poisonous environmental consequences. At the same time, coincidentally, there had been publicity in the Missoulian about a proposed route for moving heavy equipment for Tar Sands mining up over Highway 12 in Montana. The equipment was coming from South Korea, and Exxon wanted to avoid the Panama Canal. So, one of the proposed routes was for it to enter the Port of Lewiston in Idaho, then go through Montana up Highway 12 to Alberta. Now, Highway 12 was declared a Wild and Scenic Route in 1986, so they were going to drag these megaloads next to that pristine waterway, putting it in danger. 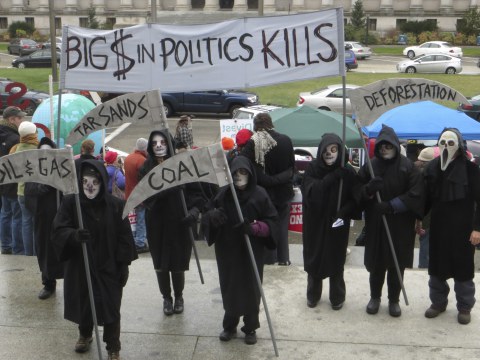 The last night of the WDN trip, I said I thought we should stop that. I live here, so I picked up the phone and called everyone I knew who cared anything at all about environmental causes in Montana. We brought together a group of about fifteen or twenty people and talked about what we could do. And that was the beginning of All Against the Haul.

WF: What have you all accomplished?

SE: Well, we stopped Exxon from bringing the equipment across Highway 12. Exxon-Mobile was the ultimate recipient of the equipment in Canada. Through a series of collaborative efforts on the part of a lot of different groups in Idaho and Montana, we put a number of obstacles in their way. The key one that stopped them in their tracks was that we were able to get the court to issue a temporary injunction, so that the state would have enough time to produce an environmental impact statement. Finally in 2013, the Nez Perce tribe won a court ruling that requires the Forest Service to ask the tribe’s permission before any megaloads can be transported over the piece of Highway 12 that crosses tribal land. After that ruling, the Nez Perce said, “We’re not ever going to give permission to do that.” So the Nez Perce permanently stopped the loads from being transported across Highway 12.

WF: What is the focus of activism now?

SE: Well, the trucks are coming back. They’re actually planning to reassemble the equipment here in Bonner, Montana, and try to drive it up Highway 200 along the Blackfoot River. There’s no organized campaign right now to fight that. Now the big focus with Tar Sands Action Network  is on the Keystone pipeline and on tribal rights in Canada. If they beat Keystone, then this won’t matter.

WF: How do you think it’s possible for people to still support the Tar Sands mining, knowing the damage
it causes?

SE: Well, we could carry that into the nth degree and consider where the media is controlled, how history is adjusted, how the lack of voice to indigenous people has been historically accepted in U.S. culture – the only people who are dying up there are Indians, so it doesn’t make the news. I think there’s a strong and very real racism running through this. We need to look at our perception of the value of life. It appears we don’t value the lives of folks who are brown the same as we value the folks that are stomping their feet in Missoula, Montana. That’s a result of the fact that we were born to privilege. Just being white and educated is privilege in this country.

WF: And the privilege to remain ignorant.

SE: And the privilege to choose ignorance. There’s no question the oil companies very specifically strategized to make the route be reliant on state permits in order to keep the federal EPA out of it.

WF: So how do you explain to yourself the willful misperception of danger?

SE: Well, it’s always about money. The way it worked at Exxon, I’m certain, is that they had a roomful of engineers, and their goal was to get this equipment to Alberta the cheapest possible way. And some guy with a computer program said, “Well look, here’s a road, let’s do that.” Not understanding that these are small, skinny, two-way highways. He’d never seen it. Highway 12 is a rock cliff on one side and a straight drop into the creek on the other. It was whack stupid. He wasn’t willfully trying to destroy the wild and scenic corridor; he was just trying to save money for the company because that was his job. Concentrated corporate power is the bad guy here. Because they have so much power, they can manipulate the regulations. And when the only god you’re serving is money, that makes sense.

WF: So how do you think people compartmentalize the value of making money versus the values of living a real life?

SE: You know, if I had the answer to that, I could change it. It’s cultural; it’s long-term socially accepted practices that build over time and then become monsters. I don’t think anyone sets out to – well, maybe they do – I don’t think anyone sets out to be evil. I think that things evolve over time. Something might look like a solution to a problem. We look at how to meet demand, and no one ever questions that maybe demand is the problem, at least not since the industrial revolution. So we’re trying to create supply. And folks think somehow that by creating supply, they’re improving the quality of life for folks, which we equate in this country with being able to drive a car, or heat our houses, or have 24 hours of incandescent light burning. We don’t spend a lot of time pointing out consequences to a lot of things. Most folks are mainly just trying to get their shoes on in the morning and get to their jobs on time and feed their kids. Who has time to think about the tribes?

WF: How hopeful do you feel that changes in cultural assumptions are possible?

SE: I see progress on so many levels. We know so much more now than we did five years ago. We’re slowly getting there. It’s a race, though. We have to get there before we have some enormous human toll from a global financial collapse or from crisping the planet. Are we going to get there before that happens? I don’t know. I just have to believe that we can.

WF: Right. The alternative is to give up.

SE: Yes, lie down and say, “Woe is me. Bring me another drink.” Well, I have a nineteen-year-old son. Having grown up on the internet, kids have a lot more information today than we did. So I’m pretty hopeful. I think the change will come from them, if we haven’t fried the place first. It’s not their fault, but at the end of the day, they’re going to have to speak up to get it changed. And just the increased level of awareness feels better to me. It’s what we don’t know that gets us. We can’t fight what we don’t know about. ~~~