The stories I have heard told, graphic and heart-rending, by northbound migrants and asylum-seekers along the Arizona-Mexico border and by Latinx and indigenous campesinos in Central America, have transformed me. Where I was once a concerned but passive on-looker, I am now a determined human rights activist, intent upon bringing stories from the southwestern borderlands to the American public. 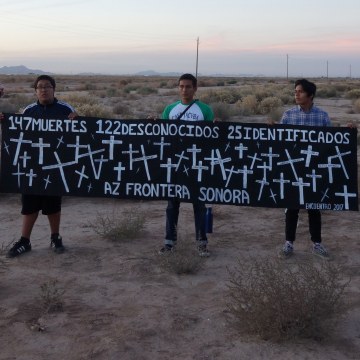 If the U.S. is ever to develop a humane and effective border policy, an informed and concerned populace will have to push hard against human rights abuses inherent in our existing policy. Introduced as Operation Gatekeeper in 1994, U.S. border policy is, in effect, death by deterrence. It forces migrants into the most dangerous desert terrain, where horrible deaths from dehydration and exposure are guaranteed for many.

Although this policy clearly stands in violation of international human rights law, that observation has little power to sway the American people. Stories do have that power. As long-time Tucson activist Reverend John Fife said in the forward to the collection of migrant stories, Crossing With the Virgin, “Stories are all we have to fight off the illness and death created by a tragically failed border enforcement policy.” When describing the victory of the Sanctuary Movement against the Reagan Administration in the 1980s, he added, “The policy changed because of the stories.” I know that stories have changed me.

In the remote Nicaraguan village of El Lagartillo in 2016, both of my Spanish instructors told me stories of themselves as teenagers, surviving a brutal attack by U.S.-trained and U.S.-armed Contra forces. Because some of their friends engaged with the Contras and fought and were killed, my teachers were able to escape to safety along with other villagers. Violence and instability are once again increasing throughout Central America, and many residents there are feeling the urge to escape to safety, to migrate north.

This past summer, while in Central America with the Saint Michael’s Guatemala Project, I listened to gruesome stories of genocide, perpetrated against the indigenous Mayan people by the Guatemalan army, a genocide recognized as such by the United Nations. Soon after I left Guatemala in early July, a Mayan woman, Juana Raymundo, was found tortured to death near the city of Nebaj, where we had been based. She was a rising political leader of the Maya. Human rights abuses are soaring in Guatemala, and poverty remains a serious problem there. Whenever I saw a house with a concrete floor rather than dirt, or even a window, I learned that one of the home’s inhabitants had made it to the United States and was sending money home. Whenever we asked Mayan people to tell us what we could do that would help them the most, they always answered, “Tell our story.”

I don’t know how many stories I have heard from migrants who entered the U.S. at great personal risk, or from Samaritan activists who have helped these migrants for decades, some since the 1980s. I remember the story of one Mexican migrant who, when cautioned against continuing north through particularly dangerous terrain, said that he had no choice – he was unable to provide for his family. Others tell of threats from gang and cartel violence. We met a young Honduran man named Dairon, for example, whose father was murdered and who was himself threatened with harm. No wonder he chose to make the hazardous trip to the U.S. to seek asylum.

The desert tells countless, silent stories. Human remains are commonly found there (over 3200 since 1999 in Arizona alone). Many more melt into the landscape, never to be discovered. Many of the deceased were seeking to reunite with family members in the States. Others were seeking employment or escaping violence.

Having heard these stories, I agree with the Trump Administration: There is a crisis along our border with Mexico. But the crisis is not an invasion of “bad guys,” coming to rape and murder U.S. citizens. For one thing, illegal border crossings at the southern U.S. border are at an historic low. Moreover, even a Border Patrol agent told our Tucson Samaritan group that probably no more than ten percent of illegal border crossings are made with mal intent. The crisis at the border is not a law enforcement crisis; it is a human rights crisis.

It is also a spiritual crisis. Although thousands of dedicated human rights activists are working on behalf of desperate migrants, America is threatened by a rising tide of racism on the one hand and a stagnant pool of apathy and unawareness on the other. In the former group, racist hatred is rapidly expanding to include humanitarian aid workers as well as the brown-skinned people they serve. On January 18, 2019, four volunteers from a Tucson-based non-profit, No More Deaths (No Mas Muertes), were found guilty of federal misdemeanor charges of leaving water in the Agua Prieta National Wildlife Refuge (“abandonment of property”). They had acted as Jesus directed, to “help the least of these” desperate Latin American migrants in immediate danger of dying from dehydration. Another of these aid workers, Dr. Scott Warren, will be tried in May on three federal felony counts, for which he could get twenty years imprisonment.

In my judgement, the greatest challenge to achieving a humane border policy in the U.S. involves the second group of problematic Americans I mentioned – the apathetic and uninformed. When I tell people about my experiences with human rights issues along our southwest border and in Central America, I do not always meet a receptive audience. Even progressive folks, who value ethnic diversity on principle, often remark, “I don’t mind them coming, but I want them to respect our laws and come legally,” or “Why are those people coming here anyway, if it is so dangerous?” When I talk about the legacy of U.S. policy throughout Latin America as a significant contributor to the northward exodus of migrants, I am generally met with silence or skepticism. We urgently need to immerse the American public in stories that convey the reasons why our Latinx brothers and sisters are taking such great risks to come to the U.S.

One sad irony here is that the U.S. needs and benefits greatly from these highly motivated workers. Our country has a long history of shouting “Stay Out!” to Latinx migrants, while at the same time quietly encouraging them to come to the U.S. to meet our on-going demand for labor. These are the workers who clean up the toxic messes that remain after wildfires have ravaged subdivisions. These are the workers who weed the vegetable fields and pick the apples. These are the people who care for our
children and elderly.

Fortunately, I can also tell inspiring stories about organizations that are working hard to correct the on-going wrongs against our Latin American brothers and sisters. Obvious examples are the American Friends Service Committee (ASFC) and Friends Committee on National Legislation (FCNL), both of which are working tirelessly on immigration issues.

Locally in Tucson, the Pima Monthly Meeting is offering sanctuary to migrants, along with many other Quaker meetings and other faith-based communities. We know a Quaker attorney whose law firm donates her time for serving as an advocate for migrant children. We know a Quaker couple in Tucson who use their personal funds to bail incarcerated migrants out of detention and assist them with their asylum requests.

I can tell stories of many humanitarian aid organizations I have encountered that are providing direct aid to migrants in southern Arizona. “Humane Borders” maintains barrels of water in the desert, which are marked with flags flying high above the mesquite and cholla cactus. “The Samaritans” (Los Samaritanos) provide water, food, clothing, and medical assistance in the desert. “No More Deaths” (No Mas Muertes) does the same, in even more remote areas of the brutal desert environment.

Besides organizations like these that provide direct aid, many others are engaged in work that seeks legislative and policy changes, as well as changes in social consciousness. For example, “Border Links” is an educational organization that focuses on telling the stories. Their website is a key hub of information about border issues and potential solutions. And many other groups are working to end the on-going mistreatment of migrants, people who are simply seeking to escape violence and provide for their families.

Some of these organizations promote acts of “civil initiative” – as distinguished from acts of “civil disobedience.” Whereas civil disobedience involves breaking laws that one considers to be immoral, civil initiative involves holding the government responsible for breaking international human rights laws and agreements. The goal of such action is to achieve profound redirection of government policy.

Remembering John Fife’s story of the Sanctuary Movement and Reagan in the 1980s (“The policy changed because of the stories.”), it is clear to me that a successful campaign of civil initiative for migrant justice will requires countless stories, told over and over, until the tide of public opinion forces the government to respect human rights and change racist, unjust immigration practices. Migrant stories are available to anyone who is willing to seek them out. As Fife concludes in Crossing With the Virgin, “Read these stories – then act to change the policies.”  ~~~

Retired wildlife biologist Peter Husby is a member of the Missoula, Montana Monthly Meeting (NPYM) and attends the Bozeman Worship Group. He and his wife Linnea spend part of the winter in Tucson, AZ, where they have become involved in border issues.